Pabay Mòr or Pabaigh Mòr is an uninhabited island in the Outer Hebrides of Scotland. 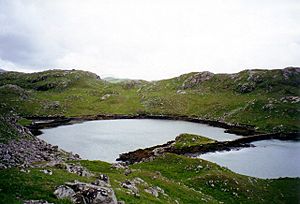 The island's name comes from papey, an Old Norse name meaning "Island of the papar or culdees". The remains of St Peter's Church and burial ground are in the south east around Loch na Teampall ("temple loch"), and to the south east of the loch itself is Cnoc na Cille ("hill of the monk's cell").

The island was connected to Clan MacLeod throughout much of its history.

Sergeant Evander MacIver was given the island on retirement from the Seaforth Regiment in 1800, in lieu of a pension. However, 27 years later, his family became victims of the Highland Clearances, and his descendants can be found in Valtos in neighbouring Lewis. It is said that the founder of Cunard was related to this family.

In World War I, it is suspected that a German U-boat landed here surreptitiously, and unloaded boxes of provisions, which were found later.

The current owner has restored a couple of blackhouses on the island, but it is uninhabited most of the time. Valtos crofters retain grazing rights on the island.

Pabaigh Mòr lies off the west coast of Lewis in West Loch Roag, north of Vacsay. The island is Lewisian gneiss with a light soil. It has a number of caves, sea spouts, and natural arches. To the north, Pabay Beag is separated by a sheltered pool.

All content from Kiddle encyclopedia articles (including the article images and facts) can be freely used under Attribution-ShareAlike license, unless stated otherwise. Cite this article:
Pabaigh Mòr Facts for Kids. Kiddle Encyclopedia.