Pacific Raceways is a mixed-use road racing and drag racing facility near Kent, Washington. The race track was constructed in 1959 and opened in 1960. The track was originally named Pacific Raceways, then became known as Seattle International Raceways in 1969. After the landowner regained control of the track in 2002, the name reverted to Pacific Raceways. 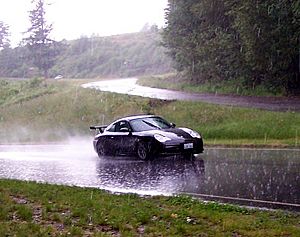 A Porsche participating in a June 2005 BMW club track day 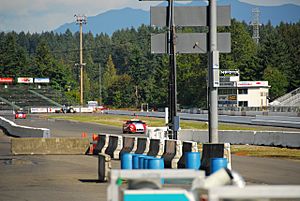 Pacific Raceways features a 2.25 miles (3.62 km) road course which is used by the SCCA, Society of Vintage Racing Enthusiasts (SOVREN), and ICSCC for automobile road racing. The Washington Motorcycle Road Racing Association (WMRRA) uses the course for motorcycle road racing. The course has more than 125 feet (38 m) of elevation change and a beautiful naturally wooded back section.

Since 1988, Pacific Raceways has been home to the Northwest Nationals (originally known as the Seafair Nationals) of the NHRA Drag Racing Series.

The track played an important role during the heyday of professional sports car racing in the U.S. during the 1960s. From 1963 through 1968, Pacific Raceways hosted the Pacific Northwest Grand Prix, which was a round of the United States Road Racing Championship. From 1967 through 1970, the venue hosted an annual round of the SCCA Trans-Am Series, including the season finales in 1967 and 1968. The Trans-Am Series returned to the track in 1975, 1977, and 1982 through 1984. The SCCA Continental Championship for Formula 5000 cars visited the track from 1969 through 1971, and again in 1973.

The track hosted a two heat race weekend of the USAC Championship Car series in 1969. The first heat was won by Mario Andretti and the second was won by Al Unser.

All content from Kiddle encyclopedia articles (including the article images and facts) can be freely used under Attribution-ShareAlike license, unless stated otherwise. Cite this article:
Pacific Raceways Facts for Kids. Kiddle Encyclopedia.