Page Field (IATA: FMY, ICAO: KFMY, FAA LID: FMY) is a public airport three miles south of Fort Myers, in Lee County, Florida. It is owned by the Lee County Port Authority; the National Plan of Integrated Airport Systems for 2011–2015 categorized it as a reliever airport.

Built in 1927 as a civil airport, Page Field was appropriated by the War Department at the beginning of World War II. Renamed Fort Myers Army Air Field and later, Page Field Army Airfield, it was used by the United States Army Air Forces Third Air Force for antisubmarine patrols and conventional bomber training in the B-24 Liberator. The facility was returned to civil control of the State of Florida and then Lee County shortly after the end of the war.

National Airlines started flights at Page Field in the 1930s; in April 1957 they were still the only airline, with six departures a day. In the 1950s the army barracks were replaced with a small terminal on the south side of the field, which was expanded in 1960. A new terminal was built in the mid-1970s on the north side of Page Field. After deregulation of the airline industry in 1978 the terminal and airfield were too small, and in 1983 airline flights moved to the new Southwest Florida Regional Airport, now called Southwest Florida International Airport (RSW). Page Field is a designated FAA reliever airport for RSW and has only general aviation and business traffic. 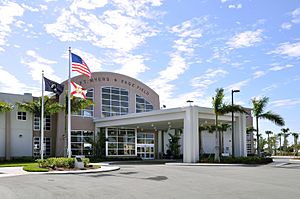 In August 2011, a new terminal complex opened on the west side of Page Field. Base Operations at Page Field is a modern, state-of-the-art, 22,600-square-foot building. Concierge front desk service, pilot lounges, weather briefing, flight planning and executive conference rooms, free Wi-Fi and a gift shop are just a few of the many amenities and professional services offered at Base Operations. There is a 600,000-square-foot ramp with convenient business aircraft parking, 24,000 square feet of itinerant hangar space and full-service Jet A and Avgas, as well as self-serve Avgas. News release issued by Lee County Port Authority

All content from Kiddle encyclopedia articles (including the article images and facts) can be freely used under Attribution-ShareAlike license, unless stated otherwise. Cite this article:
Page Field Facts for Kids. Kiddle Encyclopedia.