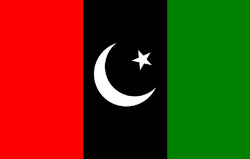 Political party flag of the PPP, although the arrow is the symbol of party

The Pakistan Peoples Party (PPP, Urdu: پاکستان پیپلز پارٹی) is a centre-left Islamic Socialist political party in Pakistan affiliated to the Socialist International. To date, its leader has always been a member of the Bhutto family. The Pakistan Peoples Party Parliamentarians (PPPP) is a party formed in 2002 by the PPP for the purpose of complying with electoral rules governing Pakistani parties.

The party was founded on November 30 1967 by Zulfiqar Ali Bhutto who was also its first chairman. The party creed is: "Islam is our faith; democracy is our politics; socialism is our economy; all power to the people."

Although its center lies in the southern province of Sindh, it also has considerable support in the more densely populated province of Punjab and even Azad Jammu and Kashmir as Azad Kashmir People's Party (Pakistan People's Party Jammu and Kashmir). It is currently in power and has been running the government since 2008; this is the 4th time the party has been in power since the Partition of Pakistan.

All content from Kiddle encyclopedia articles (including the article images and facts) can be freely used under Attribution-ShareAlike license, unless stated otherwise. Cite this article:
Pakistan Peoples Party Facts for Kids. Kiddle Encyclopedia.