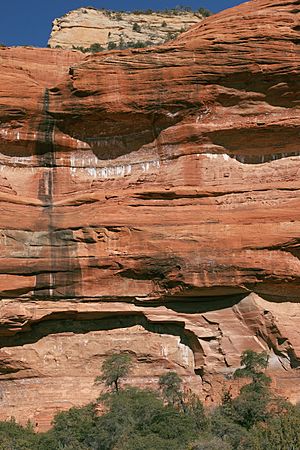 The Palatki Heritage Site is an archaeological site and park located in the Coconino National Forest, near Sedona, in Arizona, United States. In the Hopi language Palatki means 'red house'.

Palatki consists of two separate pueblos, suggesting two family or kin groups may have lived here, one in each pueblo. The circular shield-like pictographs above the eastern pueblo have been interpreted by some archaeologists as being a kin or clan symbol.

There are pictographs and petroglyphs at the Palatki site, including some that predate the cliff dwellings. Many of the pictographs on the rock walls are from the Sinagua. However, those created by peoples of the Archaic period in North America include some of the more abstract pictograph symbols and drawings that are 3,000 to 6,000 years old, and some of the petroglyphs, estimated to be 5,000 to 6,000 years old.

Visitation to the site for over a century has caused degradation of the archaeological elements. It was begun by 19th century Euro-American settlers, with little archaeological awareness for the area.

Photographs from the early 1900s show that an estimated 70 to 90 percent of the original structures have disappeared since then.

The Palatki Heritage Site park is open to visitors seven days a week from 9:30am to 3:00pm. There are two trails in the park, one to view the Sinagua cliff dwellings, and a second to view the pictographs and petroglyphs. The trails are not handicapped accessible. Purchase of a Red Rock Pass is needed for park entry.

All content from Kiddle encyclopedia articles (including the article images and facts) can be freely used under Attribution-ShareAlike license, unless stated otherwise. Cite this article:
Palatki Heritage Site Facts for Kids. Kiddle Encyclopedia.