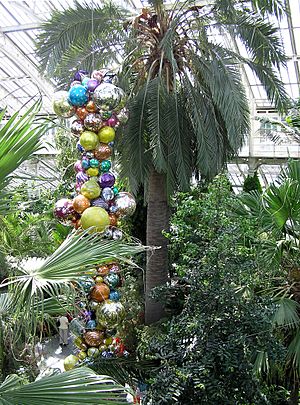 Palm syrup is made from the sap of a number of edible palms. It is common on the Canary Islands, and on the coasts of South America. It is often called Miel de palma, which translates to palm honey. 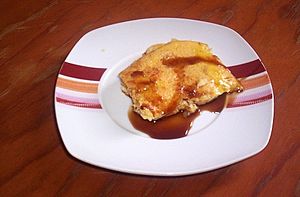 Miel de palma is used to accompany many pastries and desserts, such as pancakes and ice cream. The syrup is widely used in Southeast Asian cooking, in particular in West Bengal, where jhola gur, as it is known, is only obtainable in winter. Its sweetness tempers the flavours of spicy curries, adding its rich, molasses-like flavour to the food. It is also widely used as an ingredient in desserts, or drizzled over prepared foods.

Palm sap is a refreshing drink, and fermented palm syrup is distilled to produce various alcohols such as arrack, a spirit similar to rum. On La Gomera it is mixed with 'Parra' (similar to grappa) to produce Gomeron.

All content from Kiddle encyclopedia articles (including the article images and facts) can be freely used under Attribution-ShareAlike license, unless stated otherwise. Cite this article:
Palm syrup Facts for Kids. Kiddle Encyclopedia.