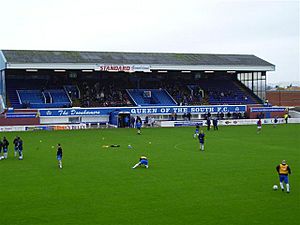 Palmerston Park is a multi-use stadium on Terregles Street in Dumfries, South West Scotland. The site of the ground was formerly a farm called Palmers Toun. This is on the Maxwelltown side of the River Nith in Dumfries. It is currently used mostly for football matches and is the home ground of Queen of the South F.C. The stadium holds 6,412 people. It also holds the record of having the tallest free standing floodlights in Scottish football, standing at 85 feet.

All content from Kiddle encyclopedia articles (including the article images and facts) can be freely used under Attribution-ShareAlike license, unless stated otherwise. Cite this article:
Palmerston Park Facts for Kids. Kiddle Encyclopedia.