Paps of Jura facts for kids 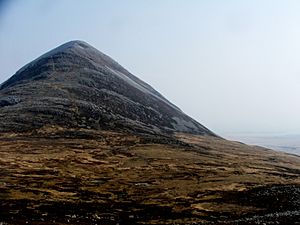 Beinn Shiantaidh from the south

The Paps of Jura (Scottish Gaelic: Sgurr na Cìche) are three mountains on the western side of the island of Jura, in the Inner Hebrides of Scotland. Their highest point is 2,575 feet (785 m).

They are steep-sided quartzite hills with distinctive conical shapes. The Paps are conspicuous hills that dominate the island landscape as well as the landscape of the surrounding area. They can be seen from the Mull of Kintyre and, on a clear day, Skye, Northern Ireland, and Malin Head.

One of the simplest routes of ascent starts from Craighouse. The route of the annual Isle of Jura Fell Race includes all three Paps and four other hills.

When viewed from Kintraw Argyll the midwinter sun briefly shines between two of the paps just before setting.

These hills were the subject of William McTaggart's 1902 painting The Paps of Jura, now displayed in the Kelvingrove Art Gallery and Museum. a

All content from Kiddle encyclopedia articles (including the article images and facts) can be freely used under Attribution-ShareAlike license, unless stated otherwise. Cite this article:
Paps of Jura Facts for Kids. Kiddle Encyclopedia.