Park Hill is a council housing estate in Sheffield, South Yorkshire, England. It was built between 1957 and 1961, and in 1998 was given Grade II* listed building status. Following a period of decline, the estate is being renovated by developers Urban Splash. The renovation was one of the six short-listed projects for the 2013 RIBA Stirling Prize. The Estate falls within the Manor Castle ward of the City. Park Hill is also the name of the area in which the flats are sited. The name relates to the deer park attached to Sheffield Manor, the remnant of which is now known as Norfolk Park.

Park Hill was previously the site of back-to-back housing, a mixture of 2–3-storey tenement buildings, waste ground, quarries and steep alleyways. The streets were arranged in a gridiron with continuous terraces of back-to-back houses facing the streets, backing onto other houses facing into an internal court-yard. There were shared privies that were not connected to mains drainage. One standpipe supporting up to 100 people. It was colloquially known as "Little Chicago" in the 1930s, due to the incidence of violent crime there. Clearance of the area began during the 1930s. The first clearance was made for the Duke/Bard/Bernard Street scheme in 1933. The courts were replaced with four storey blocks of maisonettes. In 1935 it was proposed to clear the central area which included streets to the south of Duke Street; South Street, Low Street, Hague Lane, Lord Street, Stafford Street, Long Henry Street, Colliers Row, Norwich Street, Gilbert Street and Anson Street. John Rennie, the city’s Medical Officer of Health, concluded:

“...the dwelling houses in that area [of Duke Street, Duke Street Lane, South Street and Low Street] are by reason of disrepair or sanitary defects unfit for human habitation, or are by reason of their bad arrangement, or the narrowness or bad arrangement of the streets, dangerous or injurious to the health of the inhabitants of the area, and that the other buildings in the area are for a like reason dangerous or injurious to the health of the said inhabitants, and that the most satisfactory method of dealing with the conditions in the area is the demolition of all the buildings in the area.”

Following the war it was decided that a radical scheme needed to be introduced to deal with rehousing the Park Hill community. To that end architects Jack Lynn and Ivor Smith under the supervision of John Lewis Womersley, Sheffield Council’s City Architect, began work in 1953 designing the Park Hill Flats. Inspired by Le Corbusier's Unité d'Habitation and the Smithsons' unbuilt schemes, most notably for Golden Lane in London, the deck access scheme was viewed as revolutionary at the time. The style is known as brutalism. 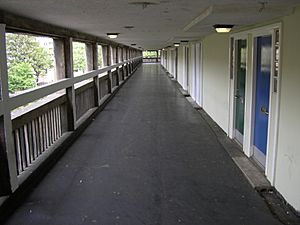 A typical deck at Park Hill.

Construction began in 1957. Park Hill (Part One) was officially opened by Hugh Gaitskell, MP and Leader of the Opposition, on 16 June 1961. The City Council published a brochure on the scheme which was in several languages, including Russian. 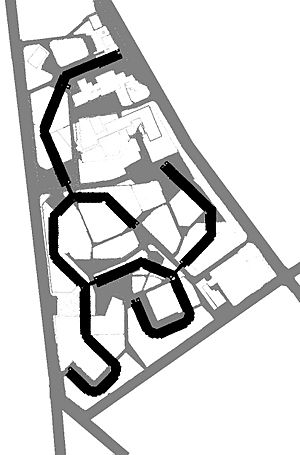 The footprint of the four blocks, with the paths and low lying structures beneath

To maintain a strong sense of community, neighbours were re-homed next door to each other and old street names from the area were re-used (e.g. Gilbert Row, Long Henry Row). Cobbles from the terraced streets surrounded the flats and paved the pathways down the hill to Sheffield station and tramlines.

The second phase consisted of a 4 high rise blocks, containing 1160 dwellings, on the hill behind, joined to the main scheme by two three-storey terraces to the east of Bernard Street that contained 153 dwellings. This was renamed in May 1961- becoming the Hyde Park flats. The terraces became Hyde Park Walk and Hyde Park Terrace. The Hyde Park tower blocks were between five and 19 storeys high. This was opened on 23 June 1966 by Queen Elizabeth the Queen Mother.

Further housing schemes were completed to similar designs, including Hyde Park and Kelvin in Sheffield. They were initially popular and successful. Government restrictions on how potential tenants were allocated to flats and the limitations of the fabric of the building which decayed when not adequately maintained, poor noise insulation and resident security caused their popularity to wane. For many years, the council found it difficult to find tenants for the flats. 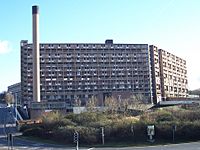 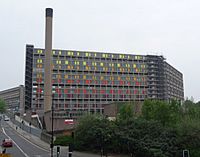 Despite the problems, the complex remained structurally sound, unlike many system-built blocks of the era, and controversially was Grade II* listed in 1998 making it the largest listed building in Europe. Sheffield City Council hoped this would attract investment to renovate the building, but this was not initially forthcoming. The decision to list the estate was controversial at the time and it continues to attract criticism. A part-privatisation scheme by the developer Urban Splash in partnership with English Heritage to turn the flats into upmarket apartments, business units and social housing is now underway. Two blocks (including the North Block, the tallest part of the buildings) have been cleared, leaving only their concrete shell. The renovation was one of the six shortlisted projects for the 2013 RIBA Stirling Prize. The renovation was due to start in around 2007 but was put on hold due to the recession with work starting in 2009 with the first phase open to residents in 2010/11. After setbacks, in October 2016 it was announced that the full renovation would be ready in 2022.

The Park Hill area of Sheffield contained and had a population density in the range of 100 to 400 per acre (250 to 990/ha). It was identified as a slum where, according to Patrick Abercrombie’s Sheffield Civic Survey and Development Plan (1924), there were death rates in the lower Park district of 20-26 per 1000 inhabitants, and infant (under one year) mortality rate of 153-179 per 1000 births. The central area amounted to 710 acres (290 ha), and contained 140 designated clearance areas. 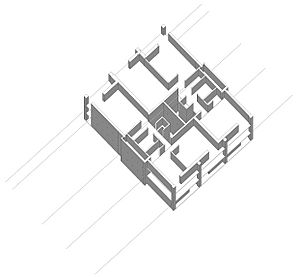 The 995 Park Hill flats and maisonettes, 4 pubs and 31 shops were built in 4 ranges linked by bridges across the upper decks. The ranges were canted at obtuse angles to maximise the panoramic views across the city and the southern Pennines. The stair columns and lifts were placed at each turn. There were two service lifts capable of elevating maintenance vehicles.

The site is steeply sloping (gradient 1 in 10) enabling the designers to maintain a constant roof level though the buildings ranged from 4 to 13 storeys. There were access roadways 10 feet (3.0 m) on every third storey, these serviced a one storey flat beneath and a 2 storey maisonette on that level and on the level above. The horizontal design repeated itself every three bays, centred on a H-frame that carried the services and stair columns. Each of these units contained a one bedroom flat, a two bedroom flat, a two bedroom maisonette and a three bedroom maisonette, and stair columns. The kitchens and bathrooms were vertically aligned allowing simple ducting for services and the Garchey waste disposal system.

Construction is of an exposed concrete frame with a progression of purple, terracotta, light red and cream brick curtain walling. However, as a result of weathering and soot-staining from passing trains, few people realise this and assume the building to be constructed entirely from concrete.

The concept of the flats was described as streets in the sky. There were four street decks, wide enough for milk floats, had large numbers of front doors opening onto them. This was a key concept of the design. Each deck of the structure, except the top one, has direct access to ground level at some point on the sloping site.

The shopping facilities, known as The Pavement were provided on the lowest part of the site, there were four public houses (pubs): The Earl George on The Pavement, The Link and the Scottish Queen on Gilbert Row, and the Parkway on Hague Row.

Park Hill is one of the seven hills on which Sheffield is built. It is south of the River Don, and to the east of the River Sheaf. The estate is on steeply rising land the lower slopes, it is upwind of the former heavily polluting industrial areas of the Don valley. The estate is bounded by Park Square roundabout on the A61, the B6070 Duke Street, B6071 Talbot Street and South Street. Immediately to the west is Sheffield railway station that in 2010–11, was the 35th-busiest in the UK, and the 11th-busiest outside London.

A piece of graffiti, "Clare Middleton I love you will u marry me", which is written on one of the "bridges" linking two of the blocks, was the subject of a documentary broadcast on BBC Radio 4 in 2011. The presenter went in search of the story behind the graffiti, eventually finding that Clare did not marry the author of the graffiti, a man named Jason. She died of cancer in 2007. As part of the refurbishment of the estate the developers have chosen to illuminate the portion of the graffiti reading "I love you will u marry me" in neon. Clare Middleton's name has not been illuminated.

Even now, inhabitants of Sheffield are split on the matter of Park Hill; many believe it to be a part of Sheffield's heritage, while others consider it an eyesore and blot on the landscape. Public nominations led it to the top 12 of Channel 4's Demolition programme. Other television appearances for the flats include Police 2020 and in an Arctic Monkeys video. A BBC programme called Saving Britain's Past sheds light on the building site's past and discusses the listing from several viewpoints in its second episode, called "Streets in the Sky". The 2014 film '71 used the buildings to recreate Belfast's notorious Divis Flats during The Troubles.

Park Hill is referenced in the lyrics of Pulp's song "Sheffield Sex City".

The building was used as the location for Harvey and Gadget's flat in This Is England 90.

All content from Kiddle encyclopedia articles (including the article images and facts) can be freely used under Attribution-ShareAlike license, unless stated otherwise. Cite this article:
Park Hill, Sheffield Facts for Kids. Kiddle Encyclopedia.