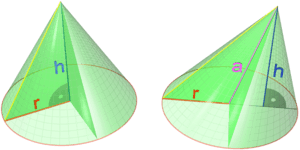 The volume of a cone depends on height and radius

is usually used, although other notations are not invalid. Usually, although not in all cases, the partial derivative is taken in a multivariable function, (i.e., the function has three or more variables, whether independent or dependent variables).

If we have a function

, then there are several partial derivatives of f(x, y) that are all equally valid. For example,

Or, we can do the following

All content from Kiddle encyclopedia articles (including the article images and facts) can be freely used under Attribution-ShareAlike license, unless stated otherwise. Cite this article:
Partial derivative Facts for Kids. Kiddle Encyclopedia.