Kids Encyclopedia Facts
For other meanings of the term, see Derivative. 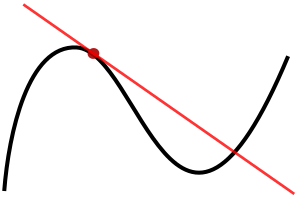 A function (black) and a tangent (red). The derivative at the point is the slope of the tangent.

In mathematics (particularly in differential calculus), the derivative is a way to show instantaneous rate of change: that is, the amount by which a function is changing at one given point. For functions that act on the real numbers, it is the slope of the tangent line at a point on a graph. The derivative is often written as

—the derivative of function

Definition of a derivative

An animation giving an intuitive idea of the derivative, as the "swing" of a function change when the argument changes.

Derivatives of linear functions (functions of the form

with no quadratic or higher terms) are constant. That is, the derivative in one spot on the graph will remain the same on another.

When the dependent variable

regardless of where the position is.

's number by adding or subtracting a constant value, the slope is still 1, because the change in

do not change if the graph is shifted up or down. That is, the slope is still 1 throughout the entire graph and its derivative is also 1.

Power functions (in the form of

) behave differently from linear functions, because their exponent and slope vary.

Another example, which is less obvious, is the function

. This is essentially the same, because 1/x can be simplified to use exponents:

In addition, roots can be changed to use fractional exponents, where their derivative can be found:

An exponential is of the form

is a function of

is raised to some power, whereas in an exponential

is in the power.

The derivative of logarithms is the reciprocal:

. This can be reduced to (by the properties of logarithms):

The logarithm of 5 is a constant, so its derivative is 0. The derivative of

For derivatives of logarithms not in base e, such as

, this can be reduced to:

Derivatives can be broken up into smaller parts where they are manageable (as they have only one of the above function characteristics). For example,

can be broken up as:

A function's derivative can be used to search for the maxima and minima of the function, by searching for places where its slope is zero.

Derivatives are used in Newton's method, which helps one find the zeros (roots) of a function..One can also use derivatives to determine the concavity of a function, and whether the function is increasing or decreasing.

All content from Kiddle encyclopedia articles (including the article images and facts) can be freely used under Attribution-ShareAlike license, unless stated otherwise. Cite this article:
Derivative (mathematics) Facts for Kids. Kiddle Encyclopedia.