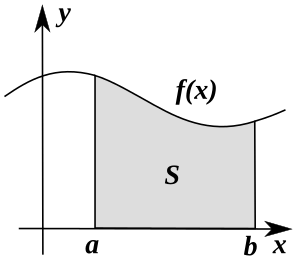 Integration is about finding the surface s, given a, b and y = f(x). The formula for the integral from a  to b, graphed above, is:
Formula:

What is the integral (animation)

In calculus, an integral is the space under a graph of an equation (sometimes said as "the area under a curve"). An integral is the reverse of a derivative, and integral calculus is the opposite of differential calculus. A derivative is the steepness (or "slope"), as the rate of change, of a curve. The word "integral" can also be used as an adjective meaning "related to integers".

The symbol for integration, in calculus, is:

as a tall letter "S". This symbol was first used by Gottfried Wilhelm Leibniz, who used it as a stylized "ſ" (for summa, Latin for sum) to mean the summation of the area covered by an equation, such as y = f(x).

Integration helps when trying to multiply units into a problem. For example, if a problem with rate,

, needs an answer with just distance, one solution is to integrate with respect to time. This means multiplying in time to cancel the time in

. This is done by adding small slices of the rate graph together. The slices are close to zero in width, but adding them together indefinitely makes them add up to a whole. This is called a Riemann sum.

Adding these slices together gives the equation that the first equation is the derivative of. Integrals are like a way to add many tiny things together by hand. It is like summation, which is adding

. The difference with integration is that we also have to add all the decimals and fractions in between.

By the fundamental theorem of calculus, the integral is the antiderivative.

If we take the function

, for example, and anti-differentiate it, we can say that an integral of

. We say an integral, not the integral, because the antiderivative of a function is not unique. For example,

. Because of this, when taking the antiderivative a constant C must be added. This is called an indefinite integral. This is because when finding the derivative of a function, constants equal 0, as in the function

. Note the 0: we cannot find it if we only have the derivative, so the integral is

A simple equation, such as

, can be integrated with respect to x using the following technique. To integrate, you add 1 to the power x is raised to, and then divide x by the value of this new power. Therefore, integration of a normal equation follows this rule:

at the end is what shows that we are integrating with respect to x, that is, as x changes. This can be seen to be the inverse of differentiation. However, there is a constant, C, added when integrating. This is called the constant of integration. This is required because differentiating an integer results in zero, therefore integrating zero (which can be put onto the end of any integrand) produces an integer, C. The value of this integer would be found by using given conditions.

Equations with more than one terms are simply integrated by integrating each individual term:

There are certain rules for integrating using e and the natural logarithm. Most importantly,

is the integral of itself (with the addition of a constant of integration):

The natural logarithm, ln, is useful when integrating equations with

. These cannot be integrated using the formula above (add one to the power, divide by the power), because adding one to the power produces 0, and a division by 0 is not possible. Instead, the integral of

In a more general form:

The two vertical bars indicated a absolute value; the sign (positive or negative) of

is ignored. This is because there is no value for the natural logarithm of negative numbers.

The integral of a sum of functions is the sum of each function's integral. that is,

The proof of this is straightforward: The definition of an integral is a limit of sums. Thus

Note that both integrals have the same limits.

This can only be done with a constant.

Proof is again by the definition of an integral.

if they are in order. (This also holds when a, b, c are not in order if we define

This follows the fundamental theorem of calculus (FTC):

All content from Kiddle encyclopedia articles (including the article images and facts) can be freely used under Attribution-ShareAlike license, unless stated otherwise. Cite this article:
Integral Facts for Kids. Kiddle Encyclopedia.