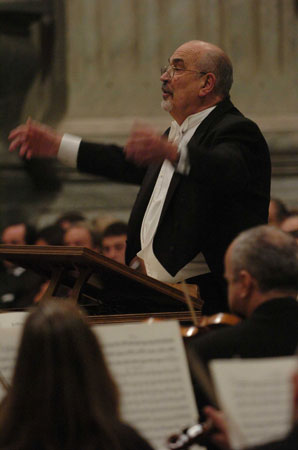 Paul Salamunovich, KCSG (June 7, 1927 – April 3, 2014) was an American choral conductor and educator. He was the Music Director of the Los Angeles Master Chorale from 1991 to 2001. He also served as Director of Music at St. Charles Borromeo Church in North Hollywood, Los Angeles in California from 1949 to 2009. He was born in Redondo Beach, California to Croatian parents.

Salamunovich died from the West Nile virus on April 3, 2014 at a hospital in Sherman Oaks, California. He was 86 years old. He was outlived by his wife and their four sons.

All content from Kiddle encyclopedia articles (including the article images and facts) can be freely used under Attribution-ShareAlike license, unless stated otherwise. Cite this article:
Paul Salamunovich Facts for Kids. Kiddle Encyclopedia.