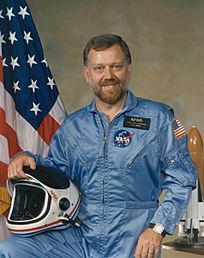 Paul Desmond Scully-Power AM (born 28 May 1944) is an Australian-American oceanographer and astronaut. In 1984, he flew aboard NASA Space Shuttle mission STS-41-G as a payload specialist. At the time, he was a civilian employee of the United States Naval Undersea Warfare Center. He was the first Australian-born person to journey into space. He was also the first astronaut with a beard.

During his time in space, Scully-Power was able to confirm spiral eddies existed. He also saw them with the naked eye.

Scully-Power was born in Sydney, New South Wales. He is married and has six children.

All content from Kiddle encyclopedia articles (including the article images and facts) can be freely used under Attribution-ShareAlike license, unless stated otherwise. Cite this article:
Paul Scully-Power Facts for Kids. Kiddle Encyclopedia.