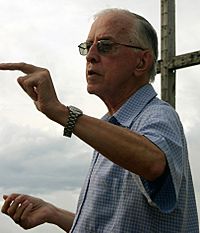 He led the Territorial Prelature of São Félix, Brazil, from 1970 to 2005. In 1971, he became a bishop. He was a well known humanitarian and human rights activist.

Casaldáliga was one of the best known experts of liberation theology. He was born in Balsareny, Catalonia.

On 4 August 2020, Casaldáliga was hospitalized in Batatais, Brazil for a respiratory infection caused by his Parkinson's disease. He died four days later on 8 August, aged 92.

All content from Kiddle encyclopedia articles (including the article images and facts) can be freely used under Attribution-ShareAlike license, unless stated otherwise. Cite this article:
Pedro Casaldáliga Facts for Kids. Kiddle Encyclopedia.