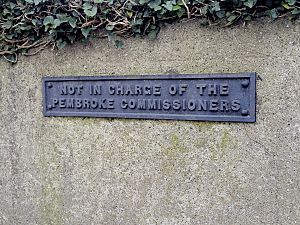 A wall-plaque from the days of The Pembroke Commissioners

Pembroke Township was an area adjoining the City of Dublin, Ireland formed for local government purposes by private Act of Parliament in 1863. The township took its name from the fact that most of the area was part of the estate of the Earl of Pembroke. The township was governed by commissioners until 1899 when it became an Urban District. In 1930 Pembroke Township was absorbed by the City and County Borough of Dublin.

The township consisted of a number of distinct areas: Ballsbridge, Donnybrook, Sandymount, Irishtown and Ringsend. The areas varied, Ringsend was an old fishing village, Irishtown an industrial district, while the remainder of the township contained affluent residential areas. Seven ninths of the township were part of the Pembroke Estate, and the agent of the estate was an ex-officio commissioner, the remaining 14 being elected by property owners. The estate had a great deal of influence on the activities of the commissioners, and also made donations of land for the use of the township. This influence ended when a more democratically elected urban district council replaced the commissioners in 1899.

Pembroke town hall was built in Merrion Road, Ballsbridge, and opened in 1880. Previously the township offices had been in nearby Ballsbridge Terrace. The town hall now forms the administrative headquarters of the City of Dublin Vocational Education Committee.

Following many years of proposed amalgamations of Dublin local authorities, The Local Government (Dublin) Act 1930 dissolved Pembroke Urban District and added its area to the City of Dublin.

All content from Kiddle encyclopedia articles (including the article images and facts) can be freely used under Attribution-ShareAlike license, unless stated otherwise. Cite this article:
Pembroke Township Facts for Kids. Kiddle Encyclopedia.