Irishtown (Irish: An Baile Gaelach) is a district of Dublin, Ireland. It is situated on the southside of the River Liffey, between Ringsend to the north and Sandymount to the south, and is to the east of the River Dodder.

Irishtown lay outside of Dublin, about 2,000 metres west of the medieval city walls (also see Ringsend). Dublin was originally a Viking city and after 1171, when an Anglo-Norman army seized it, Dublin became the centre of English rule in Ireland. The native Gaelic Irish were therefore viewed as an alien force in the city. Suspicion of them was deepened by continual raids on Dublin and its environs by the O'Byrne and O'Toole clans from the nearby Wicklow Mountains.

By the 15th century, Gaelic migration to the city had made the English authorities fearful that English language and culture would become a minority there. As a result, the Irish inhabitants of Dublin were expelled from the city proper circa 1454, in line with the Statutes of Kilkenny. The Irish population were only allowed to trade inside the city limits by daylight. At the end of the day's trading they would leave and set up camp in what was to become known as the Irishtown.

At the end of the 19th and early 20th century Irishtown was the location of the Waxies' Dargle, an annual outing by Dublin cobblers (waxies), which a well-known folk song recalls. 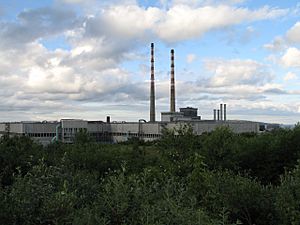 Irishtown Nature Park is a small park with a walkway which offers several kilometres of walking trails along the Poolbeg Peninsula.

All content from Kiddle encyclopedia articles (including the article images and facts) can be freely used under Attribution-ShareAlike license, unless stated otherwise. Cite this article:
Irishtown, Dublin Facts for Kids. Kiddle Encyclopedia.