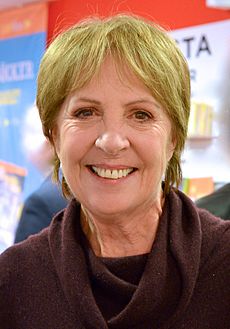 Dame Penelope Alice Wilton DBE (born 3 June 1946) is a British actress. On television, she is best known for her roles in Ever Decreasing Circles (1984–1989) and Downton Abbey. She appeared in the TV film Half Broken Things in 2007. She also played the recurring role of Harriet Jones in Doctor Who (2005–08).

Wilton was born in Scarborough, North Yorkshire, England. She has been married twice. She has a daughter, Alice (born 1977), with actor Daniel Massey.

All content from Kiddle encyclopedia articles (including the article images and facts) can be freely used under Attribution-ShareAlike license, unless stated otherwise. Cite this article:
Penelope Wilton Facts for Kids. Kiddle Encyclopedia.