Penhow (Welsh: Pen-hŵ) is a small village and community (parish) just inside the eastern edge of the boundary of the city of Newport, South Wales, within the historic county of Monmouthshire. The name Penhow is believed to be derived from the Welsh word Pen meaning head or top and How derived from the Old Norse word Haugr meaning hill or mound.

Fragments of Roman building material have been found in the area. 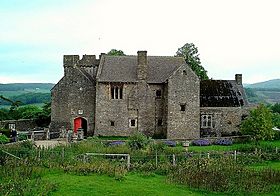 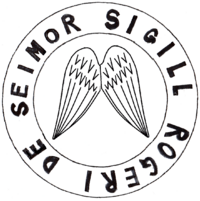 Recreation of seal reportedly used by Roger de Seymour (died circa 1299) of Undy and Penhow Castle, as reported by the Duchess of Cleveland in her Battle Abbey Roll (1889), showing the Seymour arms, the "Vol", Gules, two wings conjoined in lure or

Penhow is best known for Penhow Castle, which has claims to be the oldest inhabited castle in Wales. It was built by Sir Roger de St Maur, one of the Norman knights who served the Norman Lord of Striguil at Chepstow Castle. He built a tower house, and documentary evidence shows that he was at Penhow by 1129. It is the first known British home of the St Maur alias Seymour family which rose to national prominence in the 16th century in the person of Queen Jane Seymour, the third wife of King Henry VIII, represented today by the Duke of Somerset. Later the Seymour family, which moved to Hatch Beauchamp in Somerset and Wulfhall in Wiltshire, sold Penhow Castle to the Lewis family of St. Pierre, who converted the castle to a modern residence in 1674. Thomas Lewis' son Thomas was High Sheriff of the county, and married the daughter of Sir Richard Levett, Lord Mayor of London. The Lewis family retained ownership of Penhow Castle for several centuries.

The castle, which has a reputation for being haunted, was open to the public between 1978 and 2002.

Church of St. John the Baptist

The parish church of St. John the Baptist is next to the castle. It has 13th-century origins and was the subject of restoration work in the 19th century.

The Rock and Fountain Inn is a 17th-century coaching inn on the edge of the village. The historic inn and its five-acre site underwent a £1m renovation and redevelopment during 2010. The inn reopened as a steak and seafood restaurant in November 2010.

In 2016 a Penhow History Society was set up to examine Penhow's varied history. It was formed to research local history projects around the village and aims to promote a wider interest in its history through the publication of articles and organising public talks.

Local pubs also include the Groes Wen. The property was formerly a cottage but was converted in 1881 by then owners, a Mr and Mrs Lewis, who left their jobs as a hoop shaver and a grocer to become publicans.

All content from Kiddle encyclopedia articles (including the article images and facts) can be freely used under Attribution-ShareAlike license, unless stated otherwise. Cite this article:
Penhow, Newport Facts for Kids. Kiddle Encyclopedia.