Pentagon City is an unincorporated neighborhood (also called an "urban village") located in the southeast portion of Arlington County, Virginia, near The Pentagon and Arlington National Cemetery.

Pentagon City is less than a mile from the Potomac River, which separates the Commonwealth of Virginia from Washington, D.C. It is located on the Blue and Yellow Lines of the Washington Metro, and the Pentagon City Metro station is one of the busiest in the Metrorail system during peak and off-peak hours.

Office buildings in Pentagon City, specifically, the headquarters of the Transportation Security Administration in front and the Drug Enforcement Administration respectively.

The area was formerly known as "ReLee." The land was undeveloped through World War II. In the post-World War II era, the land was held by the Cafritz family pending future development, as empty fields and commercial warehouses. A Western Electric telephone manufacturing facility occupied the structure now redeveloped as "Pentagon Centre." In the 1960s, high-rise apartment buildings were erected on Hayes, Fern, and Joyce Streets.

On July 1, 1977, the Pentagon City Metrorail station opened on the Blue Line. Although the new station bordered a large empty field, in 10 years the station stimulated high density development. 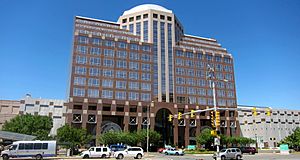 In the 1990s, MCI Communications had a major presence in Pentagon City, with the company's Consumer Markets headquarters occupying Washington Tower, a 12-story office building that sits atop the Fashion Centre at Pentagon City. MCI also occupied two of the four office towers immediately across South Hayes Street, known as Pentagon City I and II (often abbreviated "PCY").

In 2003, the Virginia Baseball Stadium Authority proposed five Northern Virginia sites as possible locations to host the relocating Montréal Expos. Pentagon Centre, shopping mall, was one of three sites in Arlington County. The other two proposed Arlington sites were a plot of undeveloped land closer to the Pentagon and a site in the neighborhood of Rosslyn. The issue was highly divisive and some Pentagon City residents launched a visible campaign against it. After the Arlington County Board opposed a stadium in Arlington, the final Virginia bid featured a site near Dulles Airport instead. Major League Baseball finally announced in the fall of 2004 that the Expos would move to the District of Columbia as the Washington Nationals.

Within Pentagon City there are many high-rise luxury apartments and condos. Around the Fashion Centre Mall complex are several apartment buildings including The Metropolitan at Pentagon Row, Pentagon Row, and Park View. Across from the Pentagon City Mall and Costco is the four-story Southampton Condominium townhouse community. Also on that block are Claridge House, and Potomac Center Genesis Care; both residences for retired as well as disabled residents.

There is an open eight phase construction site next door to Costco on Fern St, where the new Metropolitan Park development is being constructed. Kettler, real-estate development and property management company, razed warehouses that were a portion of an older industrial park for the project. The first phase of the project, completed in late 2007, consisted of The Gramercy at Metropolitan Park high-end rental apartments. Phase two of the project was completed in late 2009 and consists of The Millennium at Metropolitan Park, a second high-end rental apartment building. Both phases were architecturally planned by Robert A.M. Stern and include ground floor retail spaces suitable for any use. A two-and-a-half-acre park, with commissioned art, is also being constructed at the center of the project.

Virginia Highlands Park, located immediately south of the central retail area, provides a lush green space as well as basketball, tennis, soccer, and softball/baseball facilities. Adjacent to the park are the Aurora Hills branch of the Arlington Public Library system and a firehouse. The suburban neighborhood of Aurora Hills, which consists primarily of single-family detached housing, extends due south of Pentagon City.

All content from Kiddle encyclopedia articles (including the article images and facts) can be freely used under Attribution-ShareAlike license, unless stated otherwise. Cite this article:
Pentagon City Facts for Kids. Kiddle Encyclopedia.