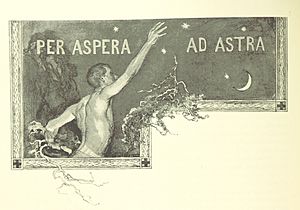 "Per aspera ad astra", from Finland in the Nineteenth Century, 1894

Per aspera ad astra (or, less commonly, ad astra per aspera) is a popular Latin phrase that means "through hardships to the stars". The phrase is one of the many Latin phrases that use the expression ad astra, meaning "to the stars".

Various organizations and groups use this expression and its variants.

All content from Kiddle encyclopedia articles (including the article images and facts) can be freely used under Attribution-ShareAlike license, unless stated otherwise. Cite this article:
Per aspera ad astra Facts for Kids. Kiddle Encyclopedia.