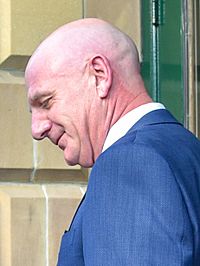 Gutwein was born in England. His mother was British and his father was from central Europe. In 1969, his family moved to Tasmania as "Ten Pound Poms". He grew up in the locality of Nunamara, near Launceston. He became an Australian citizen in 1980. He is married and has two children.

All content from Kiddle encyclopedia articles (including the article images and facts) can be freely used under Attribution-ShareAlike license, unless stated otherwise. Cite this article:
Peter Gutwein Facts for Kids. Kiddle Encyclopedia.