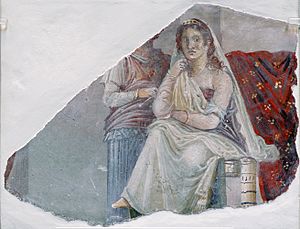 Phaedra with an attendant, probably her nurse, a fresco from Pompeii, 60-20 BC

Phaedra is the daughter of Minos and Pasiphaë in Greek mythology. She is also the wife of Theseus, the sister of Ariadne and the mother of Demophon of Athens and of Acamas. Phaedra's name comes from a Greek word, which means "bright".

There are many versions of the story of Phaedra. One is about murder and revenge.

All content from Kiddle encyclopedia articles (including the article images and facts) can be freely used under Attribution-ShareAlike license, unless stated otherwise. Cite this article:
Phaedra (mythology) Facts for Kids. Kiddle Encyclopedia.