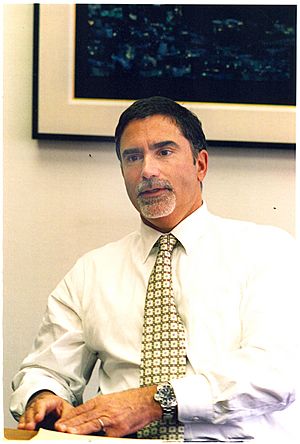 Phil Bronstein was senior vice president and executive editor of the Chronicle before serving as executive chair of the board for the Center for Investigative Reporting in Berkeley, California

Phil Bronstein (born 1951) was the executive vice president and editor of the San Francisco Chronicle.

Bronstein's career began as a reporter with KQED-TV in San Francisco. He later moved to the San Francisco Examiner. At the Examiner, Bronstein specialized in investigations and was a foreign correspondent for eight years. He has won awards for his writing about the Philippines from the Overseas Press Club, Associated Press, the World Affairs Council and Media Alliance. He was named executive editor of the Examiner in 1991, having previously served as managing editor for news. Under his service, the Examiner circulation declined rapidly, which Bronstein blamed on the afternoon delivery of the paper.

The newspaper had been selling fewer newspapers each year. In late March 2007, Bronstein called an emergency staff meeting and reportedly stated that the news business "is broken, and no one knows how to fix it." This meeting happened after several weeks of articles focused on the influence of the Internet and the blogosphere made front page headlines in the Chronicle.

On January 23, 2008, Bronstein announced that he was leaving his job as editor of the Chronicle. He became editor-at-large with Hearst Newspapers.

He was married to actress Sharon Stone from February 1998 until January 2004. They adopted a son named Roan. Bronstein married again later. He lives in Mill Valley, CA with his wife and three kids.

In June 2001, he was seriously injured by a Komodo dragon. He entered its cage at the Los Angeles Zoo after being invited in by the dragon's keeper. Bronstein was bitten on his bare foot. He did not wear shoes because the zoo worker had told him to take them off. The shoes were white could have excited the dragon.

All content from Kiddle encyclopedia articles (including the article images and facts) can be freely used under Attribution-ShareAlike license, unless stated otherwise. Cite this article:
Phil Bronstein Facts for Kids. Kiddle Encyclopedia.