Philadelphus lewisii (Lewis' mock-orange)—also known as Gordon's mockorange, Indian arrowwood, wild mockorange (though this can apply to any species in the genus) and syringa—a name that usually refers to the unrelated lilacs.—is a deciduous shrub native to western North America, from northwestern California in the Sierra Nevada, north to southern British Columbia, and east to Idaho and Montana. It was first collected by scientist and explorer Meriwether Lewis in 1806 during the Lewis and Clark expedition and the Philadelphus lewisii is named after him. 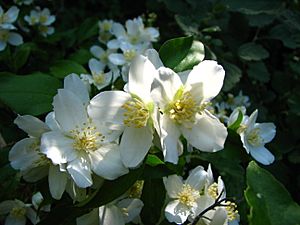 The shrub is rounded and grows to 1.5–3 metres (4 ft 11 in–9 ft 10 in) in height. It sends out long stems which are red when new and fade to gray with age, the bark shredding in small flakes. The oppositely arranged leaves vary in size across individual plants but they are usually oval, 3–5 centimetres (1.2–2.0 in) long, smooth or serrated along the edges, and light green in color with a rough texture. The flowers are produced in clusters at the ends of long stems, with four white petals up to 4 centimetres (1.6 in) long and numerous yellow stamens. At the height of flowering, the plant is covered in a mass of blossoms. The flowers have a heavy, sweet scent similar to orange blossoms with a hint of pineapple. The fruit is a small hard capsule about a centimeter long with woody, pointed wings, containing many brown seeds. It is hardy from USDA zones 3 to 9.

Native American tribes used P. lewisii for numerous purposes. The hard wood was useful for making hunting and fishing tools, snowshoes, pipes, and furniture. The leaves and bark, which contain saponins, were mixed in water for use as a mild soap. "Native American used stems for making arrows,(USDA FS 1937) bows, combs, tobacco pipes, cradles and netting shuttles." "Flowers are used in preparing perfumes and teas (Taylor 1972)."

Lewis' mock-orange prefers full sun to partial sun. It is drought-tolerant, will grow in poor soils and is suitable for xeriscaping. It provides a landscape with flashy flowers and a fruity scent. 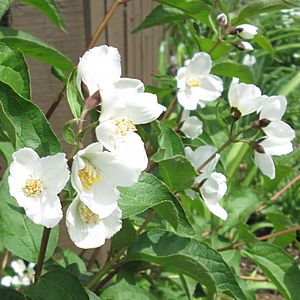 The Waterton Mockorange Philadelphus lewisii 'Waterton' was hybridized by the Alberta Horticultural Research Station in Brooks, Alberta, Canada. It is drought-tolerant and is suitable for xeriscaping. It grows to 4–6 ft. (1.2-1.8 m) in height. It is hardy from USDA zones 3 to 9. In 1933 Augustus Griffin noted that this plant was growing in what is now Waterton Lakes National Park of Canada on the east side of the Rocky Mountains. Griffin (1883-1946) was a horticulture pioneer who collected, grew, crossed and tested plants at the Canadian Pacific Railway (CPR) Headquarters Farm (now the Alberta Horticultural Research Station) in Brooks where he worked as irrigation engineer. His former home is a registered historical site.

Philadelphus lewisii is the state flower of Idaho.

All content from Kiddle encyclopedia articles (including the article images and facts) can be freely used under Attribution-ShareAlike license, unless stated otherwise. Cite this article:
Philadelphus lewisii Facts for Kids. Kiddle Encyclopedia.