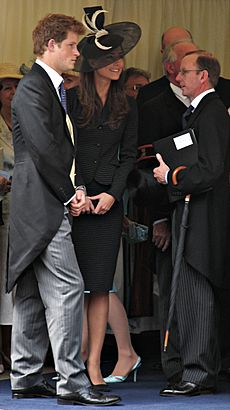 Kate Middleton, seen here with Prince Harry, hired a Philip Somerville hat in 2008 that sold for over £3,000 at a charity auction in 2012

Philip Douglas Frank Somerville (12 February 1930 – 14 September 2014) was an English milliner (hat maker). He was best known for making hats for members of the British Royal Family, including Elizabeth II, Diana, Princess of Wales and Catherine, Duchess of Cambridge. He also created headgear worn by two James Bond female villains. For his work, he was given a Royal Warrant by the Queen.

Somerville was born in Winchester, Hampshire. He was an actor in Australia with little success. When becoming a milliner, he was partly trained in Auckland, New Zealand.

All content from Kiddle encyclopedia articles (including the article images and facts) can be freely used under Attribution-ShareAlike license, unless stated otherwise. Cite this article:
Philip Somerville Facts for Kids. Kiddle Encyclopedia.