Picacho is an unincorporated community and census-designated place in Pinal County, Arizona, United States. The population was 471 at the 2010 census.

By late 2012 parts of Picacho will be removed under Arizona eminent domain law on account of Interstate 10 expansion. 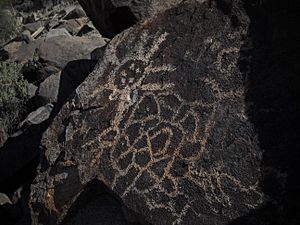 Petroglyphs in the Picacho Mountains, near Picacho Peak State Park.

All content from Kiddle encyclopedia articles (including the article images and facts) can be freely used under Attribution-ShareAlike license, unless stated otherwise. Cite this article:
Picacho, Arizona Facts for Kids. Kiddle Encyclopedia.