The Pilot Island Light is a lighthouse located near Gills Rock, on Pilot Island at the east end of Death's Door passage, in Door County, Wisconsin.

The building's plant is similar to Pottawatomie Light, but this is brick instead of stone. Until 1910 it was called Port des Morts Island Light. The original fog signal building was converted to a second assistant lighthouse keeper's residence in 1900. 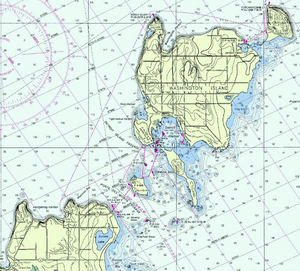 Frequent and oppressive fog made the passage hazardous; and also made duty at the light to be considered a hardship in an extremely lonely and forbidding place. A fog bell signal was installed in 1862. In 1864 it was replaced by a foghorn. In 1875 it was converted to a steam powered fog siren. In 1880 a separate fog building was built for a "duplicate" fog siren. This began a 10-inch (250 mm) steam whistle and new building in 1900 (which still exists near water's edge). In 1904, there came a realization that the whistles were "less than effective' and they were replaced by dual diaphones. The horns made living there difficult; fertilized eggs would be destroyed by the sounds.

This island and nearby Plum Island are two of four Wisconsin properties turned over by the U.S. Coast Guard to the United States Bureau of Land Management. The BLM is working to find new qualified owners, who would be required to care for the properties. The Coast Guard and BLM require the new stewards to maintain the buildings. It is one of ten lighthouses in Door County.

It was listed in the National Register of Historic Places in 1972 as the Pilot Island Light, reference #83004279.

The lighthouse is owned by the United States Fish and Wildlife Service. The grounds, dwelling and tower are closed. It is currently "abandoned, overgrown, and overrun" by a large cormorant population.

All content from Kiddle encyclopedia articles (including the article images and facts) can be freely used under Attribution-ShareAlike license, unless stated otherwise. Cite this article:
Pilot Island Light Facts for Kids. Kiddle Encyclopedia.