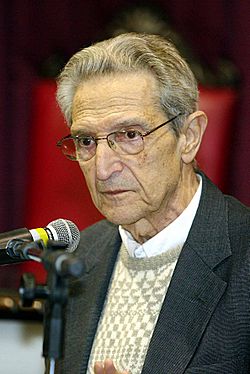 Plínio Soares de Arruda Sampaio (July 26, 1930 – July 8, 2014) was a Brazilian intellectual and political activist. He was with the Partido Socialismo e Liberdade (PSOL). He ran as a candidate for the presidency of the Federative Republic of Brazil in 2010.

He graduated from the University of São Paulo School of Law in 1954. He was president of the Catholic University Youth and was an active member of Popular Action.

He has been a prosecutor, deputy in the 1988 Constituent Assembly and chaired the Brazilian Association for Land Reform (ABRA), an institution that fights for land reform in Brazil. He also directed the weekly newspaper Correio da Cidadania.

Sampaio died in a hospital in São Paulo, Brazil from bone cancer. He had cancer for about a month. He was 83 years old.

All content from Kiddle encyclopedia articles (including the article images and facts) can be freely used under Attribution-ShareAlike license, unless stated otherwise. Cite this article:
Plínio de Arruda Sampaio Facts for Kids. Kiddle Encyclopedia.