Plainsfield Camp (or Park Plantation or Cockercombe Castle) is a possible Iron Age earthwork on the Quantock Hills near Aisholt in Somerset, England.

The so-called hill fort has several features that make it more likely to be an animal enclosure, than a defended settlement:

The case for an enclosure is less clear cut than for Trendle Ring, since Plainsfield is on a spur and does have steep slopes on two sides, making it like a promontory fort, similar to nearby Ruborough.

It is a Scheduled Ancient Monument. 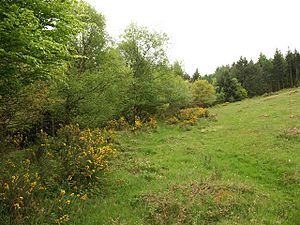 All content from Kiddle encyclopedia articles (including the article images and facts) can be freely used under Attribution-ShareAlike license, unless stated otherwise. Cite this article:
Plainsfield Camp Facts for Kids. Kiddle Encyclopedia.