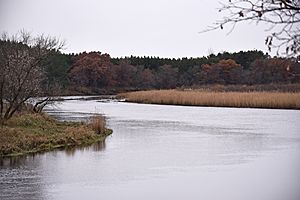 The river at the Crane Meadows National Wildlife Refuge

The Platte River is a tributary of the Mississippi River in central Minnesota in the United States. It is 55.1 miles (88.6 km) long. Platte is a name derived from the French meaning "flat".

The Platte flows from Platte Lake in southeastern Crow Wing County and follows a generally southwestward course through eastern Morrison County, through the towns of Harding and Royalton. It flows into the Mississippi River in Benton County, about 3 miles (5 km) south of Royalton.

The Platte's largest tributary is the Skunk River, which joins it in Morrison County.

All content from Kiddle encyclopedia articles (including the article images and facts) can be freely used under Attribution-ShareAlike license, unless stated otherwise. Cite this article:
Platte River (Minnesota) Facts for Kids. Kiddle Encyclopedia.