The Pleasant Hill Residential Historic District is a largely intact old neighborhood a few blocks east of Marshfield's downtown. Most of the contributing properties in the district were built between 1880 and 1949, including large, stylish homes built by businessmen and professionals, and smaller vernacular homes built by laborers. The district was placed on the National Register of Historic Places in 2000 for its concentration of intact historical architecture.

Marshfield began in 1872 when the Wisconsin Central Railroad built its main line just a hundred yards north of the forest that would become the Pleasant Hill neighborhood. Hotels and saloons opened for the railroad workers and lumberjacks, then hardware stores and harness shops. A sawmill opened, a furniture factory, a feed mill, and a stave and heading factory. Doctors and lawyers set up practices. The rough little community among the stumps grew rapidly, with a population of 2,090 by 1885. But don't picture the orderly Central Avenue of today; instead picture horses pulling clanking wagons past drunken lumberjacks stumbling to the next saloon, churning the unpaved Central Avenue into mud, dust, or slush.

The earliest large, stylish houses in Marshfield were built starting in 1880 by the officers of the Upham Company, west of Central near their sawmill in what is now the Upham House Historic District. Not long after, other businessmen and professionals began building large, stylish houses a few blocks east of Central on what was probably already called Pleasant Hill. It wasn't much of a hill, but it was higher than Central Avenue, and it must have seemed pleasant compared to the dirt and noise on Central. 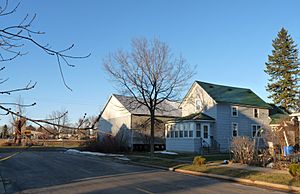 The Pleasant Hill neighborhood contains no Italianate-styled buildings. Two houses of that style are in the older Upham House district on the other side of Central Avenue. This is because the two Italianate Upham houses were built in 1880 and 1882, while the earliest surviving stylish house in Pleasant Hill was built after Italianate homes largely went out of fashion around 1885. Styles continued to change over the years. Here is a selection of houses in Pleasant Hill representing various styles, in the order built: 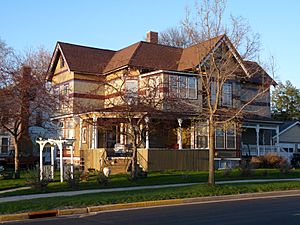 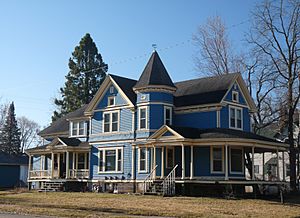 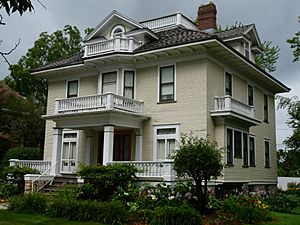 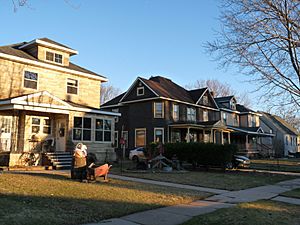 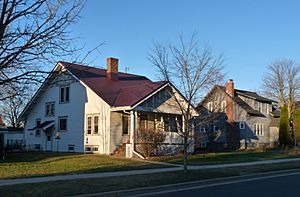 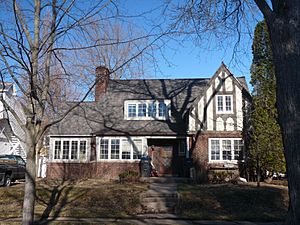 This last house is the only Tudor Revival in the district. By the time that style came into fashion, Pleasant Hill was full. 210 S. Vine must have replaced an earlier house, or been squeezed in when a large lot was broken into parcels. For the same reason, later styles like ranch are not found in this district, but many are found on Marshfield's west side beyond Oak Avenue, which was developed later.

All content from Kiddle encyclopedia articles (including the article images and facts) can be freely used under Attribution-ShareAlike license, unless stated otherwise. Cite this article:
Pleasant Hill Residential Historic District Facts for Kids. Kiddle Encyclopedia.