Pluckemin is an unincorporated community located within Bedminster Township, in Somerset County, New Jersey, United States. It was also known historically as Pluckamin. It was the site of several historic events during the American Revolutionary War. 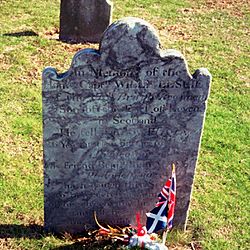 Gravestone of British Captain William Leslie, died during the Battle of Princeton, January 3, 1777

After the victory at Princeton, General George Washington and his army camped nearby from January 4 to 6, 1777 on the march to Morristown. On January 5, General Washington set up his headquarters in a local Pluckemin house, which later became known as the John Fenner House, and wrote his battle report to John Hancock. He also ordered military honors for the battle death of British Captain William Leslie, a friend of the American Dr. Benjamin Rush. The gravestone is in the graveyard of the former St. Paul's Lutheran Church (built 1757), where the Pluckemin Presbyterian Church is now located.

During the winter of 1778–79, the Pluckemin Continental Artillery Cantonment Site, commanded by General Henry Knox, was located nearby.

On February 18, 1779, General Knox organized a grand celebration, The French Alliance Ball, for the first anniversary of the alliance with France. In attendance were General Washington and his wife Martha. Over four hundred people enjoyed dancing, drinking and fireworks.

The Pluckemin Village Historic District was added to the National Register of Historic Places on July 26, 1982.

All content from Kiddle encyclopedia articles (including the article images and facts) can be freely used under Attribution-ShareAlike license, unless stated otherwise. Cite this article:
Pluckemin, New Jersey Facts for Kids. Kiddle Encyclopedia.