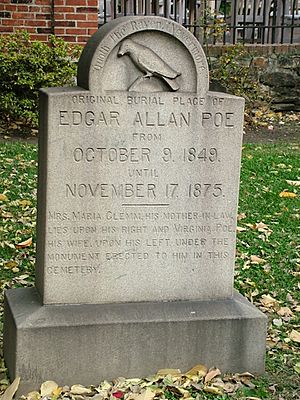 The Poe Toaster paid a stealthy visit to the cenotaph marking the site of Poe's original grave, in Baltimore, every January 19th for almost 80 years.

Poe Toaster is the media sobriquet used to refer to an unidentified person (or probably more than one person in succession) who, for over seven decades, paid an annual tribute to American author Edgar Allan Poe by visiting the cenotaph marking his original grave in Baltimore, Maryland, in the early hours of January 19, Poe's birthday. The shadowy figure, dressed in black with a wide-brimmed hat and white scarf, would pour himself a glass of cognac and raise a toast to Poe's memory, then vanish into the night, leaving three roses in a distinctive arrangement and the unfinished bottle of cognac. Onlookers gathered annually in hopes of glimpsing the elusive Toaster, who did not seek publicity and was rarely seen or photographed.

According to eyewitness reports and notes accompanying offerings in later years, the original Toaster made the annual visitation from sometime in the 1930s (though no report appeared in print until 1950) until his death in 1998, after which the tradition was passed to "a son". Controversial statements were made in some notes left by the post-1998 Toaster, and in 2006 an unsuccessful attempt was made by several onlookers to detain and identify him. In 2010 there was no visit by the Toaster, nor has he appeared any year since, signaling an end to the 75-year tradition.

In 2016, the Maryland Historical Society selected a new "Toaster" to revive the tradition.

Poe died at the age of 40 in Baltimore on October 7, 1849, under mysterious circumstances. The Poe Toaster tradition may have begun as early as the 1930s, according to witnesses, and continued annually until 2009. Each year, in the early hours of the morning of January 19 (Poe's birthday), a black-clad figure carrying a silver-tipped cane, his face obscured by a scarf or hood, entered the Westminster Hall and Burying Ground in Baltimore. At the site of Poe's original grave—which is marked with a commemorative stone—he would pour a glass of Martell cognac and raise a toast. He then arranged three red roses on the monument in a distinctive configuration and departed, leaving the unfinished bottle of cognac. The roses were believed to represent Poe, his wife Virginia, and his mother-in-law Maria Clemm, all three of whom were originally interred at the site. The significance of the cognac is uncertain, as it does not feature in Poe’s works (as would, for example, amontillado); but a note left at the 2004 visitation suggested that the cognac may have represented a tradition of the Toaster's family rather than Poe's. Several of the cognac bottles are kept at the Edgar Allan Poe House and Museum in Baltimore.

A group of varying size composed of reporters and Poe enthusiasts observed the event each year. A photograph, reputedly of the Toaster, was published by Life Magazine in 1990.

Events leading up to Poe's bicentenary

In 2006, a group of onlookers unsuccessfully attempted to detain the Poe Toaster as he departed the Burial Ground. Aside from that incident, spectators never interfered with the Toaster's entry, tribute ritual, or departure, nor was any concerted effort made to identify the individual.

In 2007 a 92-year-old man named Sam Porpora claimed that he had started the Poe Toaster tradition. A former historian for Baltimore's Westminster Church, Porpora claimed that he invented the Toaster in the 1960s as a "publicity stunt", to reinvigorate the church and its congregation, and then falsely told a reporter that the visitations had begun in 1949. However, published reports of the annual visits date from well before the 1960s; for example, a 1950 article in The (Baltimore) Evening Sun that mentions "an anonymous citizen who creeps in annually to place an empty bottle (of excellent label) against the gravestone."

Porpora's daughter said she had never heard of her father's actions, but that the story was consistent with his "mischievous nature". Nevertheless, Jeff Jerome pointed out that the details of Porpora's story seemed to change with each telling. "There are holes so big in Sam's story, you could drive a Mack truck through them," he said. Jeff Savoye of the Edgar Allan Poe Society also questioned Porpora's claims, but admitted he could not definitively disprove them. While never retracting his story, Porpora later acknowledged that it was not he making the annual visits, that someone else (he knew not who) had made the tradition his own.

In 2008 Jerome reported that nearly 150 gathered to observe the Toaster's appearance. In 2009, the 200th anniversary of Poe's birth, the crowd was smaller than in previous years—despite the bicentenary milestone—and the Toaster left no note.

In 2010 the Poe Toaster failed to appear. Jerome, who had witnessed every visitation from 1976 on, had no explanation, but did speculate that if the Toaster intended to end the tradition, the 2009 bicentennial of Poe's birth would mark a logical ending point.

The 2011 anniversary saw only the appearance of four impostors—immediately dubbed "faux Toasters"—identified as such because all four walked in clear sight of waiting observers (contrary to the real Toaster's secretive nature); none gave the secret signal that only Jerome knows, a gesture the Toaster predictably made each year at the grave; and none arranged the roses in the unique pattern established by the Toaster. The faux Toasters' appearance sparked controversy: While some preferred that the tradition die a "dignified death", others urged that it be carried on, by imitators if necessary.

In 2012, once again, there was no appearance by anyone identifiable as the "original" Toaster. Jerome (who has denied rumors that he himself was the Toaster) proclaimed the tradition "over with". "I would have thought they would leave a note for me saying it was over," he said. "That does annoy me a little bit, but they are under no obligation to [do so]."

In 2015, the Maryland Historical Society organized a competition to select a new individual to resurrect the annual tribute in a modified, tourism-friendly form. The new Toaster—who will also remain anonymous—made his first appearance during the daylight hours of January 16, 2016 (a Saturday, three days before Poe's birthday), wearing the traditional garb and playing Saint-Saëns' Danse macabre on a violin. After raising the traditional cognac toast and placing the roses, he intoned, "Cineri gloria sera venit" ("Glory paid to one's ashes comes too late", from an epigram by the Roman poet Martial), and departed.

All content from Kiddle encyclopedia articles (including the article images and facts) can be freely used under Attribution-ShareAlike license, unless stated otherwise. Cite this article:
Poe Toaster Facts for Kids. Kiddle Encyclopedia.