Point Chevalier ( commonly known as Point Chev) is a residential suburb and peninsula in the city of Auckland in the north of New Zealand. It is located five kilometres to the west of the city centre on the southern shore of the Waitemata Harbour. The suburb was originally a working-class area, with some state houses in the area, but over the past several decades the suburb has seen growth into becoming a middle-class suburb, with several redevelopment projects either completed or underway. Like most of the suburbs surrounding, Point Chevalier is known for its Californian style bungalows.

The suburb stretches from the town centre / shopping area of the same name on its southern edge (Great North Road, and near the SH16 motorway) to the tip of the peninsula in the north. Its postcode is 1022. 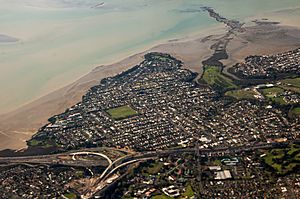 The suburb is situated to the north of State Highway 16 and the campus of Unitec New Zealand and to the west of the suburb of Western Springs. It is largely sited on the triangular peninsula, which extends north into the harbour for 1800 metres. The soil is mostly clay without the overlay of volcanic material which covers much of the Auckland isthmus; this means the vegetation of the area is less lush than some of the other suburbs of Auckland.

Visible from Coyle Park is Meola Reef, which is situated to the east of the Point Chevalier peninsula and bordering the suburb of Westmere. Meola Reef is an outcrop of black basalt rock which extends some distance north into the Waitemata Harbour. This is the end of the lava flow emanating from Te Tatua-a-Riukiuta, a volcano several miles south of this area. Formerly a landfill site, it has now been rehabilitated as a park and nature reserve. Other parks in the suburb include Walker Park, Eric Armshaw Reserve and Coyle Park. The latter is located at the northern tip of the peninsula.

Before the European settlement of the Auckland isthmus in the 1840s, small Maori settlements existed in the area which later became Point Chevalier, including one at Meola Reef and a fishing settlement at Rangi-mata-rau (later Point Chevalier Beach). The latter was a staging point for shark fishing off Kauri Point on the inner Waitemata Harbour.

As the city of Auckland grew, Point Chevalier gained strategic importance as it lay on what was then the main land route out of Auckland, the Great North Road. Because of this, a military encampment was located here during the New Zealand Wars of the 1860s. The name 'Point Chevalier' comes from Captain George Robert Chevalier (1825 - 1871), a musketry instructor serving in the 65th Regiment, stationed at this camp.

The Point Chevalier area had a largely rural character up until the period between the two World Wars.

Coyle Park and Point Chevalier Beach were popular destinations for family outings during the interwar period, particularly in summer. Tramlines ran down Point Chevalier Road to Coyle Park, near the beach; during summer, special trams were laid on during summer to transport people from Grey Lynn, while buses brought others from Mount Albert and other suburbs in West Auckland. Following the Second World War, the combination of increased car ownership and the Auckland Harbour Bridge (1959) resulted in a complete reversal of this activity. The once crowded beach was deserted, and the various businesses that had prospered on the summer trade closed down or relocated. Whilst the tramlines were removed during the 1950s, the broadness of Point Chevalier Road - otherwise atypical for a fairly small suburb - and the paved-over roundabout terminus near Coyle Park both remain as evidence of their presence.

Due to sand loss and degradation over the 20th century, Point Chevalier Beach was resanded in 2008 with 16,000 cubic metres of sand from Pakiri Beach pumped onto the foreshore, creating a more usable beach area. The resanding has attracted larger numbers of summer visitors in the years since, making the northern part of Point Chevalier busy (and sometimes congested with vehicles) on fine weekends and holidays and at festival times.

Up until the 1980s Point Chevalier's population was largely blue-collar or elderly, the latter particularly due to the Selwyn Village retirement community (one of the largest in New Zealand). Over the 1980s and 1990s the suburb has become home to increasing numbers of young families and middle-class professionals. However, census data suggests that Point Chevalier has experienced a strong decrease in its young adult population (ages 20–34) since 2001; analysts have ascribed this to the increasing cost of housing in the central-western suburbs of Auckland. 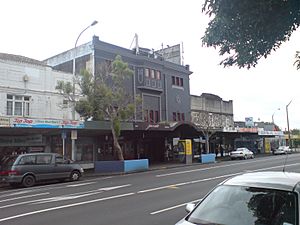 The Liverpool Estate is a piece of land bordered at one end by Great North and Point Chevalier Roads. Besides housing, it now contains a supermarket, assorted shops and the Point Chevalier Community Library. The estate was created in 1913 by a group known as the Liverpool Estate Syndicate and was marketed as a "last opportunity" to acquire main road frontage close to the city. It was only a fifteen-minute walk to the Arch Hill terminus and a significant selling point was that a motorbus passed by. The Point Chevalier Motor Bus Company ran from 1915-1920 and was owned by prominent locals, including a member of the Dignan family. Following the First World War with the rising price of oil, it went into voluntary liquidation. Estate land was also connected to sewerage and drainage, gas and water were available on the boundary and a school was nearby. Another factor was that it was not far from the "beautiful Point Chevalier beach."

Several of the streets in the Liverpool Estate were named after New Zealand birds – Moa, Huia and Kiwi Roads and Tui Street - and according to the book Rangi-Mata-Rau: Pt Chevalier Centennial 1861-1961, it was a bird-loving (although unnamed) member of the Dignan family who got the honour of naming them.

The houses of the area are predominantly 1920s Californian bungalows and 1930s and 1940s Art Deco, which gives the suburb an interesting pre-war atmosphere. Rising real estate values have spurred gentrification and subdivision in recent years, particularly north of Meola Road and in locations near to the water. Towards the northern end of the peninsula there are many houses from the postwar period, and a number of larger architect-designed homes have recently appeared close to Point Chevalier Beach.

There is a certain amount of light industry located in the area, especially close to Great North Road. Up until the mid-2000s car yards were a common land use along this road.

There is a retirement community, Selwyn Village, on the western side, overlooking the Waitemata Harbour. This community is run by an Anglican church trust and includes self-contained houses and apartments, bed-sits, a hospital, and a chapel.

The main shopping area at the intersection of Point Chevalier Road and Great North Road was developed during the interwar period; the most notable of the buildings here are:

Walker Park is the home ground of the Point Chevalier Pirates club.

Home to Point Chevalier Sailing Club Inc (established in 1919) is one of the oldest sailing dinghy clubs in NZL and still very active with junior sailing programmes as well as racing.

The Hallyburton Johnstone Sports Complex in Dignan Street is home to the Point Chevalier Croquet and Bowling clubs.

The proportion of people born overseas was 23.9%, compared with 27.1% nationally.

Although some people objected to giving their religion, 54.3% had no religion, 33.7% were Christian, and 6.6% had other religions.

The main primary school in the suburb is Pt Chevalier Primary School, situated on Te Ra Road with a roll of 659 students. Primary aged children also attend St Francis Catholic School in Montrose St, which has a roll of 276. Both schools cater for year 1-6 students.

The suburb is served by Pasadena Intermediate School (Years 7-8) in Moray Place, which has a roll of 232.

All these schools are coeducational. Rolls are as of July 2016.

All content from Kiddle encyclopedia articles (including the article images and facts) can be freely used under Attribution-ShareAlike license, unless stated otherwise. Cite this article:
Point Chevalier Facts for Kids. Kiddle Encyclopedia.