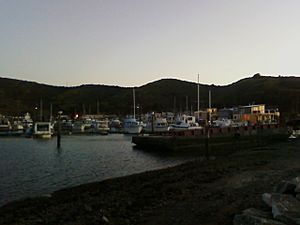 The community, as seen from the channel connecting the marina and San Pablo Bay. 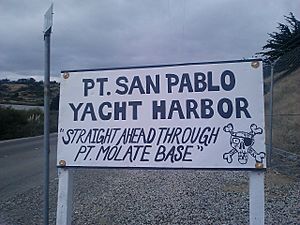 The village is home to a few dozen individuals living in hundreds of boats and a few dozen stilt houses. The area also features the Point San Pablo Marina and Yacht Club. The village is located in a ravine at the northern tip of the Potrero Hills and alongside a small cove the opens to San Pablo Bay, where the marina is protected from waves, in addition to a breakwater. The village is also the starting point for visitors to East Brother Light Station a historic landmark.

The hills surrounding the town are completely undeveloped and feature chaparral landscaping. The area is near the Chevron Richmond Refinery and some tank farm containers are visible in addition to the Richmond Landfill across the waters of Castro Cove, a contaminated estuarine habitat. Point San Pablo Beach is also located here. The village has panoramic views of the undeveloped coastlines of southern Napa, Sonoma, and Solano counties and eastern central Marin County. The hills surrounding the village are completely undeveloped and feature Eucalyptus trees and coastal chaparral vegetation. The isolation of the area and undeveloped lands make deer sightings commonplace. Other animals in the area include the endangered salt marsh harvest mouse and California clapper rail. The areas around the marina and breakwaters have many egrets, herons and other birds that enjoy the small wetlands areas.

The Point San Pablo Yacht Harbor is privately owned. Both the San Pablo Sportsmen's Club and the Point San Pablo Preservation Society are non-profit organizations located at the harbor. The society's goal is to preserve the harbor and surrounding lands and waterways for public use and enjoyment.

All content from Kiddle encyclopedia articles (including the article images and facts) can be freely used under Attribution-ShareAlike license, unless stated otherwise. Cite this article:
Point San Pablo Yacht Harbor Facts for Kids. Kiddle Encyclopedia.