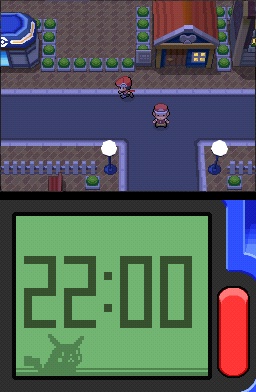 The bottom screen of the Nintendo DS displays the Pokétch, a multi-functional device with features related to time tracking and player status.

Pokémon Diamond and Pearl are two role-playing games (RPG) made by Game Freak and published by Nintendo for the Nintendo DS handheld. They're the fourth main group of Pokémon games in the series. In the game, the number of Pokémon is brought up to 493.

A third version to Diamond and Pearl called Pokémon Platinum was released in Japan in Autumn 2008, and released in the USA and UK on March 22, 2009.

The gameplay of Diamond and Pearl are much the same as previous Pokémon games. The player starts the game with one Pokémon, and catches more Pokémon using Poké Balls. The player can also use his/her Pokémon to battle other Pokémon. When the player spots a Pokémon or a trainer, the battle screen appears. During battle, the player may fight, use an item, switch Pokémon, or run away from battle (the last option is not available when facing trainers). All Pokémon have hit points (HP). If a Pokémon's HP is down to zero, it faints and cannot battle until the player revives it. If the player's Pokémon defeats the opponent's Pokémon, it gets experience points. After building up enough experience points, it will gain a new level. Most Pokémon evolve into a new form with a new name when they reach a certain level.

The player gets sent on a mission by Professor Rowan to fill up the Pokédex. The head of Team Galactic, Cyrus tries to destroy the world using Dialga and Palkia to create a new world that he will rule. In Pokémon Platinum, Giratina stops him as he is about to do it, and Cyrus then wants to capture it for its power instead.

All content from Kiddle encyclopedia articles (including the article images and facts) can be freely used under Attribution-ShareAlike license, unless stated otherwise. Cite this article:
Pokémon Diamond and Pearl Facts for Kids. Kiddle Encyclopedia.