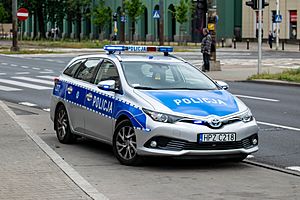 The police force in Poland is called policja. It was created in 1990 and has about 100,000 officers. Every Polish region has its own police department, and Warsaw has a separate department, called the Capital Police Command (Komenda Stołeczna Policji). It also counts the employees of BOA/SPAP, special police units. Most of the towns and some villages in Poland also have their city guards, which provide help to the police.

The Polish Police Headquarters is located in Warsaw. Polish police schools are located in Piła, Słupsk, Katowice, and Legionowo.

Previous Polish police was called Milicja Obywatelska, it was active during the Polish Peoples Republic.

All content from Kiddle encyclopedia articles (including the article images and facts) can be freely used under Attribution-ShareAlike license, unless stated otherwise. Cite this article:
Policja Facts for Kids. Kiddle Encyclopedia.