Pollock is a village in Sullivan County, Missouri, United States. The population was 89 at the 2010 census.

Pollock was established in July, 1873 by H.F. Warner and William Lane and originally consisted of thirty-two blocks. Another fourteen blocks, located south of the original, was added to the town plat in 1876 via Godfrey's Addition. By 1877 Pollock included two general stores, a drug store, blacksmith shop, one hotel, a schoolhouse and a small depot for the Burlington & Southwestern Railroad with a town population of one hundred, and a United States Post Office was established in Pollock in 1879. A major fire swept through a portion of the Pollock business district in January, 1936. Three buildings—Rosenberry's Garage, Morlan General Store, and Anspach Cafe' -- were total losses, while buildings containing O.L. Casto's store and Miller's Store received major damage.
The Pollock community had a high school between 1923 and 1939. Class sizes were predictable small considering the towns population, with an average of ten students per class year. The smallest class was 1938 with only three graduates, while the largest was the Class of 1937 with thirteen diploma recipients. Due to economic conditions the junior and senior years were discontinued between 1932 and 1937, and students in those grades had to finish their education elsewhere, primarily Milan, which was readily accessible via rail. The Pollock high school closed for good following the 1939 graduation and all secondary students incorporated into the Milan school district. The elementary school continued a few years longer into the mid 1950s. Currently all children in the Pollock area attend classes in the Milan C-2 school district. 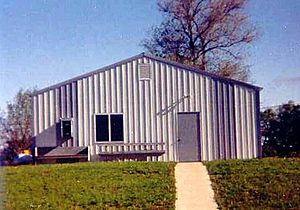 In the mid-1970s, not long after Pollock celebrated its centennial, eight new apartments—housed in two buildings—were constructed for use by the elderly. A new all-metal community building was constructed in the late 1980s, with an addition to the building to house the U.S. Post Office built in the late 1990s. Significant community support resulted in the building of a Pollock City Park around 1990. Residents William Casteel, Melvin Casto and Dick Stewart spearheaded a fundraising campaign and recruited volunteers from far and wide to acquire park equipment and prepare the grounds. Pollock suffered a significant blow on July 26, 2011 when the United States Postal Service announced plans to permanently close the Pollock post office as part of a nationwide restructuring plan. An earlier attempt in the late 1980s to close the Pollock post office was appealed and overturned with the help of U.S. Senator Kit Bond and other Missouri politicians.

There were 39 households of which 25.6% had children under the age of 18 living with them, 43.6% were married couples living together, 10.3% had a female householder with no husband present, 10.3% had a male householder with no wife present, and 35.9% were non-families. 33.3% of all households were made up of individuals and 18% had someone living alone who was 65 years of age or older. The average household size was 2.28 and the average family size was 2.84.

There were 54 households out of which 27.8% had children under the age of 18 living with them, 48.1% were married couples living together, 11.1% had a female householder with no husband present, and 33.3% were non-families. 31.5% of all households were made up of individuals and 13.0% had someone living alone who was 65 years of age or older. The average household size was 2.43 and the average family size was 2.83.

All content from Kiddle encyclopedia articles (including the article images and facts) can be freely used under Attribution-ShareAlike license, unless stated otherwise. Cite this article:
Pollock, Missouri Facts for Kids. Kiddle Encyclopedia.