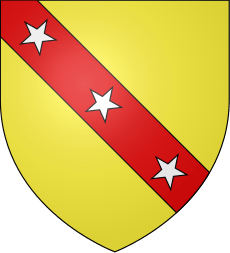 Arms of Bampfylde of Poltimore and North Molton: Or, on a bend gules three mullets argent

Another drawing of Poltimore House by Edmund Prideaux

Poltimore House is an 18th-century country house in Poltimore, Devon. The Manor of Poltimore was from the 13th to the 20th century the seat of the Bampfylde family, which acquired the title Baron Poltimore in 1831. The house retains much of the fabric of earlier buildings on the site erected by the family. It is designated a Grade II* listed building.

It fell into a dilapidated condition during the second half of the 20th century. A group of volunteers began raising funds to restore the house in 2003, after it was a finalist in the BBC's Restoration programme, missing out on the funding that went with the top prize.

The Bampfylde family were bequeathed the Manor of Poltimore in 1298 by William Pontyngton, a canon of Exeter Cathedral. There is no record of where the early manor house was located, but it is believed to have been situated in or near the village. There is no evidence of a previous house having occupied the site of the present one. Poltimore House was built by Richard Bampfylde(1526-1594), who started the works in 1550.

There is no record of when the house was completed, although when Richard died in 1595, he bequeathed the house to his son, Amyas Bampfylde (d.1626), in his will. As Richard had been appointed Sheriff of Devon in 1576, it is likely that his grand house was complete by then. Two wings of his original house can still be seen in the present building. It is not known what form the original house took, whether it was just these two wings forming an "L", or if there was a third or even a fourth wing forming a courtyard in the middle. Later members of the family added to the building, the last major building works having been in 1908.

It was occupied by the Bampfylde family until 1920, when it was offered for sale with its grounds and estate. The estate was sold but not the house and grounds, which were then leased to house Poltimore College, a girls' school that closed in 1939. In 1940, the boys from Dover College were evacuated to Poltimore House. The House became a private hospital in 1945, which was taken over by the National Health Service when it came into existence in 1948. It closed as a hospital in 1974. 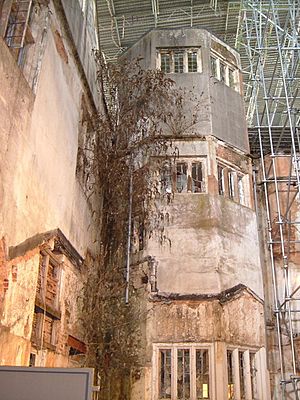 Poltimore House, view from inside the courtyard of restoration works

It then had a series of owners before suffering an arson attack in 1987 and being left empty from then on. It suffered from theft and vandalism and fell into a state of dilapidation.

In 2000, Poltimore House Trust was set up to find a use for the house and restore it. The first phase was to encase the house in scaffolding with a roof to protect it, which was done in 2005. In 2009, the Trust secured £500,000 from English Heritage to begin the restoration process.

Poltimore House Trust published its 10-year strategic business plan in 2009. The plan states that the renovated Poltimore House will have become by 2019:

This range of projects is designed to bring Poltimore House and its grounds back to use as an important resource for local and regional businesses, arts and the community.

All content from Kiddle encyclopedia articles (including the article images and facts) can be freely used under Attribution-ShareAlike license, unless stated otherwise. Cite this article:
Poltimore House Facts for Kids. Kiddle Encyclopedia.