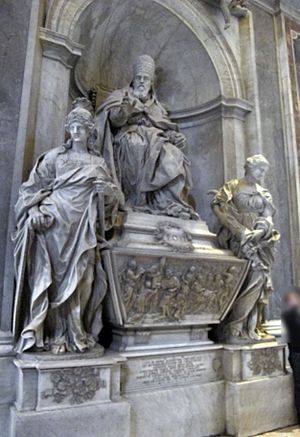 He was born in Florence. His grandmother was a sister of Leo X.

In 1569, Cosimo I de' Medici, Grand Duke of Tuscany, sent Father Medici to be the ambassador of Florence in the court of Pope Pius V. For 15 years in Rome, Father Medici was the representative of the city and the Medici family.

Gregory XIII made him Bishop of Pistoia in 1573. He was named Archbishop of Florence in 1574.

Gregory raised him to the rank of cardinal in 1583.

In 1596, Clement VIII sent Cardinal Medici as ambassador to the court of Henry IV of France.

On 1 April 1605, Cardinal Medici was elected pope. He chose to be called Leo XI in honor of his uncle Pope Leo X.

When he was elected, Leo XI was almost seventy years of age, and he died within the month. His death came as a result of fatigue and cold in the ceremony of taking possession of the Basilica of St John Lateran. He was called Papa Lampo ("Lightning Pope") because his papacy was so short.

All content from Kiddle encyclopedia articles (including the article images and facts) can be freely used under Attribution-ShareAlike license, unless stated otherwise. Cite this article:
Pope Leo XI Facts for Kids. Kiddle Encyclopedia.