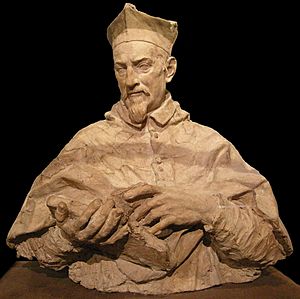 Alessandro Algardi (November 27, 1598 – June 10, 1654) was an Italian high-Baroque sculptor active almost exclusively in Rome, where for the latter decades of his life, he was, along with Francesco Borromini and Pietro da Cortona, one of the major rivals of Gian Lorenzo Bernini. He is now most admired for his portrait busts that have great vivacity and dignity.

All content from Kiddle encyclopedia articles (including the article images and facts) can be freely used under Attribution-ShareAlike license, unless stated otherwise. Cite this article:
Alessandro Algardi Facts for Kids. Kiddle Encyclopedia.