Popeye (or 'The Popeye') is the name given to a series of motor launches which take paying passengers on pleasure cruises on Torrens Lake, in the North Parklands of Adelaide, capital of South Australia. It is one of the city's "top tourist attractions". 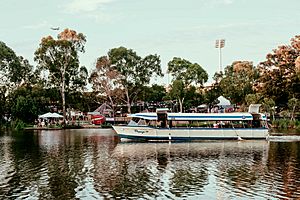 The original Popeye, a 25-foot (7.6 m) boat holding up to 20 passengers, was built for Gordon Stanley Watts, a Gallipoli veteran, by Harold Lounder in 1935 in one of several workshops which were then dotted along the banks of Torrens Lake. She proved so popular that in 1939 a second boat, Miss Centenary, was purchased, which had previously run cruises at Glenelg. She did not however (according to the local legend) gain the same acceptance with the children, who preferred to "wait for Popeye", prompting Watts to re-christen her Popeye II.

Later, three new 38-foot (12 m) jarrah-hulled boats, capable of carrying 40 passengers each, were built at Port Adelaide; they were numbered Popeye 3, Popeye 4 and Popeye 5, running round trips between Elder Park and Adelaide Zoo. Apart from scheduled runs on weekends and holidays during the warmer months, Popeyes were available for private hire, for weddings, children's birthday parties and other events.

During the years that he was skipper of Popeye, if there were a large number of children, Watts would call out "Anyone's birthday today?" If so, the lucky child would be allowed to steer the boat. Amongst the other Popeye skippers were the boatbuilder Harold Lounder and Roland "Sunny" Grey.

In March 1962 Keith Altmann, owner of riverside café, later restaurant, Jolley's Boathouse, took over the Popeye business. In 1982 three new fibreglass launches Popeye I, Popeye II and Popeye III were launched as replacements for the ageing original wooden boats. These boats were launched by then Australian Prime Minister Malcolm Fraser.

After 49 years as the owner, Altmann sold the business to current owners Tony and Lidija Shuman in 2011. He also sold adjacent business Captain Jolley's Paddleboats. The Shumans already owned and operated Elder Park Paddleboats business which operated alongside, as well as a successful bike hire business.

All content from Kiddle encyclopedia articles (including the article images and facts) can be freely used under Attribution-ShareAlike license, unless stated otherwise. Cite this article:
Popeye (boat) Facts for Kids. Kiddle Encyclopedia.