Port Byron is a village in Rock Island County, Illinois, United States. The population was 1,676 at the 2010 census. 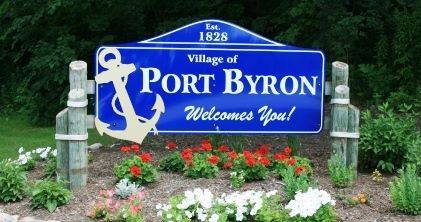 This is one of two welcome signs entering Port Byron. This logo is also used for the City Hall and Public Works by replacing "Welcomes You" with one of those two departments, matching the font "Port Byron" is written in.

There were 623 households out of which 30.0% had children under the age of 18 living with them, 57.9% were married couples living together, 6.9% had a female householder with no husband present, and 32.6% were non-families. 28.6% of all households were made up of individuals and 12.4% had someone living alone who was 65 years of age or older. The average household size was 2.46 and the average family size was 3.08.

The event of the year in this small town is the Great River Tug Fest, held since 1987 on the second full weekend in August. Following a fireworks display on Friday night, the Mississippi River is closed on Saturday afternoon. The tug-of-war is made up of 10 men teams of 20 and one woman's team of 25. After a large rope is pulled across the river to Le Claire, Iowa, a tug of war takes place. The side with the most wins gets bragging rights for the year, along with the traveling alabaster trophy. Port Byron, the 2016 champion, holds an overall record of 19-11 in the competition. The rope used for the tug is 2700 feet in length and weighs about 700 lbs. Tug Fest is the only event in the United States that allows the Mississippi River to be closed down. The women on the Illinois side are the only undefeated team in Tug Fest history.

Will B. Rolling is the name of a 30' high statue of a rider perched atop his Penny-farthing. Erected on November 13 along the Great River Trail in Port Byron, the statue was a gift to the village from former mayor Lawrence Bay and his wife Carol.

Art: Larry Bay, "Will B. Rolling" Sculpture. Mr. Bay and his wife, Carol, self-financed the large public sculpture as a landmark for their hometown of Port Byron. The sculpture, depicting a man riding a bicycle, was inspired by and created from the same mold as "Ben Biking", in Sparta, Wis.

All content from Kiddle encyclopedia articles (including the article images and facts) can be freely used under Attribution-ShareAlike license, unless stated otherwise. Cite this article:
Port Byron, Illinois Facts for Kids. Kiddle Encyclopedia.