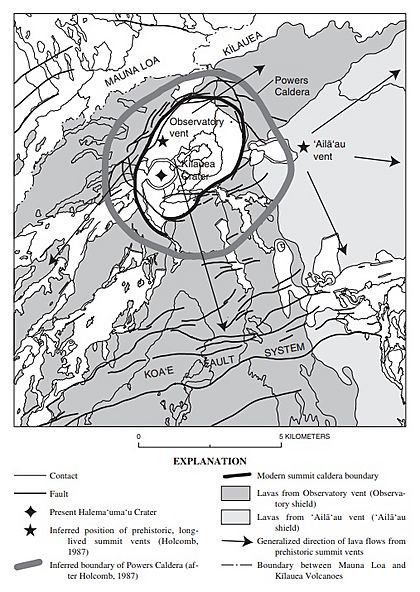 The Powers Caldera is a buried summit caldera of Kīlauea on the Big Island of Hawaii. It is the precursor to the modern but smaller Kīlauea Caldera, having formed about 2,200 years ago as a result of powerful phreatomagmatic eruptions. These explosive eruptions lasted for a period of about 1,200 years, during which time the Uwēkahuna Ash Member was deposited. Sometime between 850 and 950 CE, the most powerful explosive eruption sent rocks weighing 9.7 lb (4.4 kg) at least 3 mi (4.8 km) from the summit. Golf ball-sized rocks fell at the coast, 11 mi (18 km) away.

Effusive eruptions began to fill the Powers Caldera with lava about 1,000 years ago, breaking the 1,200-year-long interval dominated by explosive eruptions. Lava completely filled the Powers Caldera and then overtopped its rim, solidifying the structure. This was followed by a period of voluminous tube-fed lava flows from 1000 to 1500 CE (including the ʻAilāʻau eruption), with the modern smaller Kīlauea Caldera having formed inside the buried Powers Caldera in about 1470 CE.

The Powers Caldera is named after Howard A. Powers, who conducted a careful field study of the Uwēkahuna Ash Member in 1948 and inferred the existence of the caldera.

All content from Kiddle encyclopedia articles (including the article images and facts) can be freely used under Attribution-ShareAlike license, unless stated otherwise. Cite this article:
Powers Caldera Facts for Kids. Kiddle Encyclopedia.