The Pozer River (in French: rivière Pozer) is a river that originates in Shenley Township and flows into the Chaudière River at Saint-Georges. The latter flows northward to empty onto the south shore of the St. Lawrence River. It flows in the municipalities of Saint-Honoré-de-Shenley, Saint-Benoit-Labre and Saint-Georges (Aubert-Gallion sector), in the Beauce-Sartigan Regional County Municipality, in the administrative region of Chaudière-Appalaches, in Quebec, in Canada.

The main neighboring watersheds of the Pozer river are:

From its source, the Pozer River flows on 26.9 kilometres (16.7 mi) divided into the following segments:

Its winding course extends for approximately 25 kilometres (16 mi) in a northeast direction, crosses the municipality of Saint-Benoît-Labre, the former municipality of Aubert-Gallion, flows into the Parc des Sept-Chutes, up to its confluence with the Chaudière River at Saint-Georges. 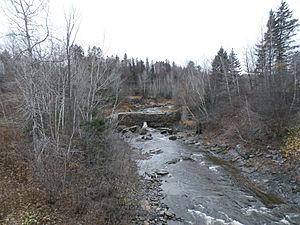 Pozer river and old dam seen from the bridge on route 271 upstream.

Formerly, this watercourse was designated "Jean-Gagnon river"; this name appears on a document of 1818. This name, still attested on a map of 1864 in the form of "Rivière Gagnon", would evoke a pioneer (or a family group) established in this zone. The spelling of this name can also derive from the phonetic evolution of Gallion, one of the components of the patronymic which served to name the lordship Aubert-Gallion. Gayon, Galion and Gagnon are spellings in popular use according to the sources designating this seigneury at various times.

The current name of the river recalls the family of John George Pfo(t)zer (the spelling became Pozer), who acquired the Aubert-Gallion seigneury in 1808. He was nicknamed the Millionaire Pozer. In 1817, he brought to Canada, 189 of his German compatriots whom he installed in his seigneury. This name was imposed by usage towards the end of the last century. It probably evokes more specifically Christian Henry Pozer (1835-1884), lawyer, born and died in the manor of Aubert-Gallion. The latter was elected deputy in 1867 and became a senator in 1876. Throughout his career, he devoted himself actively to the erection of new townships, mining exploration and the construction of railways in Beauce

The toponym "Pozer River" was made official on December 5, 1968 at the Commission de toponymie du Québec.

All content from Kiddle encyclopedia articles (including the article images and facts) can be freely used under Attribution-ShareAlike license, unless stated otherwise. Cite this article:
Pozer River Facts for Kids. Kiddle Encyclopedia.