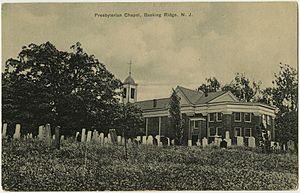 Presbyterian Church in Basking Ridge is a historic church at 1 E. Oak Street in the Basking Ridge section of Bernards Township in Somerset County, New Jersey, United States. Its churchyard held the Old Oak Tree of Basking Ridge, estimated to be 600 years old, until 2017.

The church congregation was founded in 1717. The present church was built in 1839 in Greek Revival style. 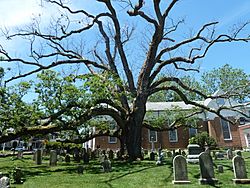 In the historical graveyard of the church stood a White Oak, sometimes called the "Holy Oak", until 2017. It was 619 years old, possibly the oldest white oak in the world. It was nearly 100 feet (30 m) tall and had a spread of more than 130 feet (40 m). It had a trunk circumference of 20 feet (6.1 m) and its lower branches were supported.

English evangelist George Whitfield and American clergyman James Davenport, preached under the tree on November 5, 1740 to a crowd of 3,000, in the First Great Awakening.

George Washington's troops were drilled on the village green, within view, and Washington picnicked under the tree with the Marquis de LaFayette.

The 5,500 French troops of Jean-Baptiste Donatien de Vimeur, comte de Rochambeau marched by in 1781, on their route to Yorktown, Virginia and the decisive battle of the American Revolutionary War.

In June 2016, the tree was "failing to thrive" and showed signs of distress as its upper parts failed to sprout leaves. By September 2016, the tree had died.

The new biggest tree in New Jersey is identified as another white oak tree in the yard of the Sparta Historical Association of Sparta, New Jersey.

The Historic American Buildings Survey inventoried the church in 1939.

It was added to the National Register of Historic Places in 1974.

All content from Kiddle encyclopedia articles (including the article images and facts) can be freely used under Attribution-ShareAlike license, unless stated otherwise. Cite this article:
Presbyterian Church in Basking Ridge Facts for Kids. Kiddle Encyclopedia.