Preston Hollow is a neighborhood in north Dallas, Texas. It is bordered on the south by the city of University Park, Texas, an enclave within Dallas.

In 1924, Ira P. DeLoache bought a 56-acre (23 ha) farm. Preston Hollow's first lots were carved out of the former farm parcels. De-Loache and Al Joyce developed Preston Hollow, with development largely occurring in the 1930s. At first Preston Road was the area's only connection to Downtown Dallas. Terry Box of The Dallas Morning News said that the Northwest Highway "was nothing more than muddy right of way." The area that would later become Preston Center was a dairy farm in the early to mid-20th Century.

The developers intended Preston Hollow to be what Box said was "more than a flatland suburb on the fringes of a new and growing Dallas." Doctors, entrepreneurs, industrialists, lawyers, and oil businesspeople moved to Preston Hollow. Many built country-style estates that housed horses and stables. A private school which later became St. Mark's School of Texas opened in the area.

In the early 1930s during the Depression, Edward James Solon, the treasurer of a company called Interstate and the partner who came with Karl Hoblitzelle from Chicago to Dallas, purchased the first Preston Hollow corner property at Douglas and Averill Way. DeLoache built a Dillbeck designed house on the property. This Tudor styled home was considered the first of the many large estates built in what is now termed the Old Preston Hollow area—an earlier large house in the area, by the pond near Avrill, was considered as part of the farm.

In the 1930s, moving beyond Northwest Highway was considered "going into the sticks" and risky in terms of attracting affluent homeowners. Later many people said that E.J. Solon's estate started the North Dallas migration.

Incorporated as a municipality in 1939, and provisioned by the Preston Road Fresh Water Supply District, the North Dallas town of Preston Hollow was named for the deep wooded area with creeks and hollows extending westward from Preston Road. The bramble in Preston Hollow was unique in the Dallas area and all home builders in the area were to preserve it as part of the covenant.

In 1956, the neighborhood association's covenant stated that only white residents were allowed to live in Preston Hollow. This restriction, though apparently never enforced, and ruled unconstitutional by the US courts in the 1960s, was repealed in 2000. That restrictive language is included in thousands of association covenants.

In September 2008, Preston Hollow returned to national headlines when New York Post gossip columnist Cindy Adams wrote a column claiming that U.S. President George W. Bush and his wife Laura Bush had purchased a home in Preston Hollow. Described as "a big house on five acres," Adams also claimed that this house would have "horse stables, lake views, mountain views, golf club views" and that Preston Hollow is "a town outside Dallas." Dallas media pointed out the significant factual errors in the column (perhaps, most glaringly, Dallas' location in the Great Plains region of Texas, where no mountains exist) and noted that the real estate agent cited denied both the report or that she had ever been contacted by the Post. 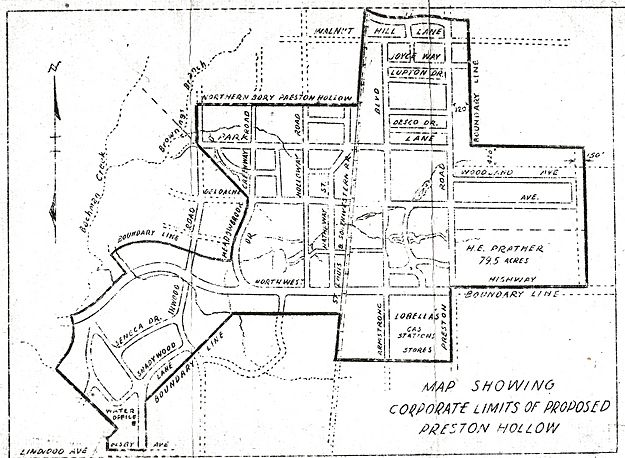 Preston Hollow is located 6 miles (9.7 km) north of Downtown Dallas. Preston Road is the main arterial road of the area. Terry Box of The Dallas Morning News said in 1987 that the corridor Preston Road travels through, between the Northwest Highway, and the LBJ Freeway, is referred to as the "golden corridor" of Dallas due to its wealth.

Lisa Tanner of the Dallas Business Journal said "The lines that define Preston Hollow are somewhat blurred." She said that Preston Hollow has been commonly defined as being bounded by the Northwest Highway to the south, Royal Lane to the north, and Hillcrest Road to the east. She said that there were several "western measures." Mary Jacobs of The Dallas Morning News said that area real estate agents usually define the boundaries of Preston Hollow as the Northwest Highway, Royal Lane, Hillcrest Road, and Midway Road. Roland Anderson, a resident quoted by The Dallas Morning News, said that real estate agents use the name in the broadest manner possible because they believe the name has "panache." He added that, in the words of Jacobs, "Preston Hollow is really an amalgamation of neighborhoods."

The area belonging to the former Preston Hollow town is now known as the "Estate area." The area is in western Preston Hollow. Tanner said that the estate area is east of Midway Road and west of Preston Road. Jacobs said that the estate area is bounded by Preston Road, Walnut Hill Lane, Midway Road, and the Northwest Highway. She added that "The so-called estate area on Preston Hollow's western side boasts large lots with grand entrances, rolling hills and winding streets, and is home to some of the most luxurious mansions in Dallas." Walnut Hill was the northern boundary of the former Preston Hollow municipality. Terry Box of The Dallas Morning News said in 1989 that the area north of Walnut Hill was "less prestigious" but "still affluent, with well-maintained upper-middle- and middle-class neighborhoods stretching to Royal Lane."

All content from Kiddle encyclopedia articles (including the article images and facts) can be freely used under Attribution-ShareAlike license, unless stated otherwise. Cite this article:
Preston Hollow, Dallas Facts for Kids. Kiddle Encyclopedia.