North Dallas is an area of numerous communities and neighborhoods in Dallas, Texas (United States). The phrase "North Dallas" is also sometimes used to include any suburb or exurb north of Dallas proper within the metropolitan area. The majority of North Dallas is located in Dallas County, while a small portion is located in Collin and Denton Counties. North Dallas generally includes areas of Dallas north of Northwest Highway, along with Lake Highlands and areas of Dallas north of IH-635 known as Far North Dallas. The area has strong social and economic ties to the Dallas enclave of Park Cities, and two inner suburbs of Dallas, Richardson and Addison. It is the wealthiest part of Dallas, but has its adjacent, yet scattered rough parts, as well.

As Dallas has grown over the last several decades, the concept of "North Dallas" has changed from the area just north of downtown, along Central Expressway (where North Dallas High School is located), to the far northern reaches of Dallas proper and the suburbs to the north of the city.

Lake Highlands, and its neighborhoods, are generally considered as part of North Dallas by people and media, while at the same time a distinct area.

The area is served by seven branches of the Dallas Public Library system:

As the majority of North Dallas was developed in the late 20th century, the primary mode of local transportation is the automobile and the area has a low density compared with neighborhoods built in the early 20th century. Efforts made by the City of Dallas and Dallas Area Rapid Transit to increase the availability of alternative modes of transportation have received varying degrees of support from North Dallas residents. Since 1996, two light rail lines flanking North Dallas on the east have been constructed and well-received, and two more flank North Dallas on the west, in northwest Dallas. However, plans to build a commuter or light rail line through the North Dallas area along the "Cotton Belt" (the St. Louis Southwestern Railway) has met opposition from residents and local organizations. 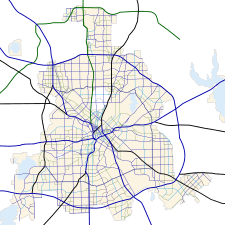 Major and minor thoroughfares in Dallas and its enclaves 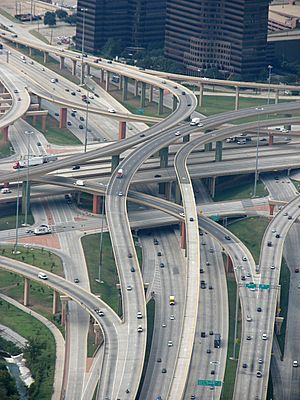 The Central Expressway and I-635 interchange in North Dallas, commonly known as the High Five Interchange.

Additionally, four separate beltways arc across North Dallas: in order from their proximity to downtown:

All content from Kiddle encyclopedia articles (including the article images and facts) can be freely used under Attribution-ShareAlike license, unless stated otherwise. Cite this article:
North Dallas Facts for Kids. Kiddle Encyclopedia.