Addison is an incorporated town in Dallas County, Texas, in the United States. Addison is situated to the immediate north of the city of Dallas. The town's population was 13,056 at the 2010 census. Addison and Flower Mound were the only two Texas towns with a population greater than 10,000 in the 2010 census; since then the towns of Prosper and Trophy Club have also exceeded 10,000 in population estimates. Addison is best-known within the Dallas-Fort Worth Metroplex region for its abundance of restaurants and nightlife.

According to the United States Census Bureau, the town has a total area of 4.4 square miles (11 km2), all of it land.

Addison is bordered by the cities of Dallas, Farmers Branch, and Carrollton.

There were 7,378 households out of which 14.3% had children under the age of 18 living with them, 24.5% were married couples living together, 8.2% had a female householder with no husband present, and 63.9% were non-families. 52.2% of all households were made up of individuals and 10.2% had someone living alone who was 65 years of age or older. The average household size was 1.77 and the average family size was 2.69.

Addison is considered to be part of the humid subtropical region.

Joe Chow, past mayor of Addison

The land occupied by Addison was settled as early as 1846 when Preston Witt built a house near White Rock Creek. In 1902 the community named itself Addison, after Addison Robertson, who served as postmaster from 1908 to 1916. The first industry was a cotton gin, opening in 1902 on Addison Road.

The community was formerly known as Noell Junction after settler Sidney Smith Noell, after whom Noel Road and Knoll Trail are named. 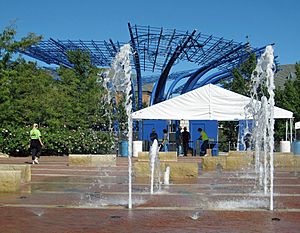 Because of Addison's overwhelmingly commercial atmosphere, residents of Addison enjoy a unique lifestyle not common in other suburbs.

Residents and visitors can enjoy many Addison attractions. There are special events in Addison 22 weekends of the year. The WaterTower Theatre produces plays and musicals and hosts the annual Out of the Loop Festival. The Cavanaugh Flight Museum houses a collection of aircraft since World War I. Addison Circle Park, built in the early 2000s, is a venue for several seasonal outdoor events, such as the "Addison Kaboom Town!," "Addison Oktoberfest," and the foodie fun event, "Fork & Cork". The Addison Improv Comedy Club brings in some of the most acclaimed comedians in the industry.

Addison is noted for being home to the original locations of both Texas de Brazil and Fogo de Chão, two Brazilian Churrascaria franchises that are both in the midst of rapid national expansion.

All content from Kiddle encyclopedia articles (including the article images and facts) can be freely used under Attribution-ShareAlike license, unless stated otherwise. Cite this article:
Addison, Texas Facts for Kids. Kiddle Encyclopedia.